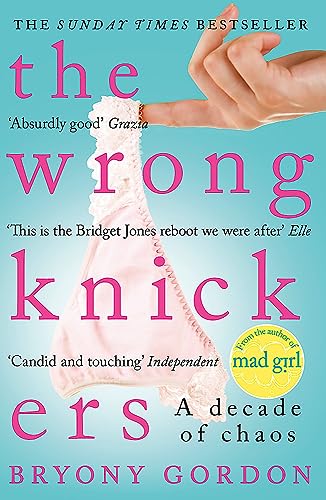 The Wrong Knickers - A Decade of Chaos
by Bryony Gordon

The Wrong Knickers - A Decade of Chaos Summary

The Wrong Knickers - A Decade of Chaos by Bryony Gordon

Bryony Gordon survived her adolescence by dreaming about the life she'd have in her twenties: the perfect job; the lovely flat; the amazing boyfriend. The reality was something of a shock. Her Telegraph column was a diary of her daily screw-ups; she lived in a series of squalid shoe boxes; and her most meaningful relationship of the entire decade was with a Marlboro Light.

Here in the Sunday Times bestselling THE WRONG KNICKERS Bryony busts open the glamorized myth of what it means to be a young (perpetually) single girl about London town, and shares the horrible and hilarious truth. The truth about picking up a colleague at the STI clinic; sinking into debt to fund a varied diet of wine, crisps and vodka; and how it feels when your dream man turns out to be a one night stand who hands you someone else's knickers in the morning.

Bryony's wonderfully ridiculous and ultimately redemptive story is essential reading for everyone whose 'best years' weren't quite what they were expecting...

The Wrong Knickers - A Decade of Chaos Reviews

The book is the equivalent of Bridget Jones, Carrie Bradshaw and Hannah Horvath exchanging slightly guarded handshakes, then realising they've all slept with the same terrible men...dark, funny, [and] honest - The ObserverI laughed, I cried, I winced, I whooped, I ran out and bought it for all my single friends. A fantastic writer. - India KnightEye-poppingly truthful and unexpectedly touching, this is the Bridget Jones reboot we were after. - ElleBryony Gordon is a very bad girl - and an even better writer. - Camilla LongThe Wrong Knickers is brilliantly funny, brilliantly honest, deliciously indiscreet and, at times, incredibly moving. It's the most truthful, evocative and hilarious account of what it is to be a twenty something girl in Britain that I've read in a very long time. - Polly VernonAbsurdly good - GraziaAnyone who has got halfway through their 20s to realise that adulthood isn't all they'd hoped will read this memoir of a misspent youth howling with recognition and helpless laughter. - ElleAny book that sees the protagonist exclaim the line, "Beyonce is an essence, not a human being" is literary gold as far as we're concerned... This book definitely needs a disclaimer - if you read it in public, you will definitely get some funny looks for guffawing quite a lot. - Heat

In the 13 years that she has worked for The Telegraph, Bryony Gordon has become one of the paper's best loved writers. Her weekly column in the Sunday Telegraph's Stella Magazine, How the Other Half Lives, has won her an army of fans who over the last four and half years have followed her journey from single girl about town to - finally! - settled mum. Bryony is now 32 and lives in Nappy Valley (Clapham) with her fiance, a financial journalist. The last sentence is one she never thought she would see written down on paper.

GOR006323914
The Wrong Knickers - A Decade of Chaos by Bryony Gordon
Bryony Gordon
Used - Very Good
Paperback
Headline Publishing Group
2015-01-01
320
147221014X
9781472210142
N/A
Book picture is for illustrative purposes only, actual binding, cover or edition may vary.
The book has been read but remains in clean condition. All pages are intact and the cover is intact. Some minor wear to the spine.