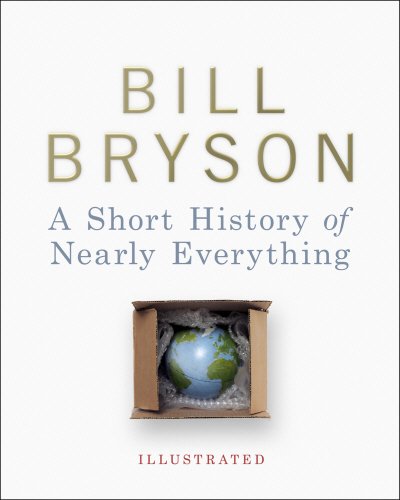 A Short History of Nearly Everything - Illustrated, A
by Bryson, Bill

Used Price
$54.99
inc. GST
Free Shipping in Australia
Aims to make the world of science both understandable and entertaining to millions of people around the globe. This illustrated edition brings to life almost everything that has happened from the Big Bang to the rise of civilization, with full-colour photographs, drawings, portraits, and cartoons.
Very Good Good Well Read

A Short History of Nearly Everything - Illustrated, A Summary

A Short History of Nearly Everything - Illustrated, A by Bryson, Bill

In the bestselling, prize-winning "A Short History of Nearly Everything", Bill Bryson achieved the seemingly impossible by making the world of science both understandable and entertaining to millions of people around the globe. Now, in this glorious new illustrated edition, everything that has happened from the Big Bang to the rise of civilization is even more vividly brought to life with stunning full-colour photographs, drawings, portraits, and cartoons.

A Short History of Nearly Everything - Illustrated, A Reviews

"Stylish [and] stunningly accurate prose. We learn what the material world is like from the smallest quark to the largest galaxy and at all the levels in between . . . brims with strange and amazing facts . . . destined to become a modern classic of science writing."
--"The New York Times
"Bryson has made a career writing hilarious travelogues, and in many ways his latest is more of the same, except that this time Bryson hikes through the world of science."
--"People
"Bryson is surprisingly precise, brilliantly eccentric and nicely eloquent . . . a gifted storyteller has dared to retell the world's biggest story."
--"Seattle Times
"Hefty, highly researched and eminently readable."
--Simon Winchester, "The Globe and Mail
"All non-scientists (and probably many specialized scientists, too) can learn a great deal from his lucid and amiable explanations."
--"National Post
"Bryson is a terrific stylist. You can't help but enjoy his writing, for its cheer and buoyancy, and for the frequent demonstration of his peculiar, engaging turn of mind."
--"Ottawa Citizen
"Wonderfully readable. It is, in the best sense, learned."
--"Winnipeg Free Press
"[A Short History of Nearly Everything] is a crash course in the basics of climatology, chemistry, biology, botany, geology and physics. Bryson's enthusiasm is infectious, his explanations simple. You don't need to be a rocket scientist to get them."
--"The Citizen's Weekly

Bill Bryson was born in Des Moines, Iowa, in 1951. He settled in England in 1977, and lived for many years with his English wife and four children in North Yorkshire. He and his family then moved to America for a few years but have now returned to the UK. He succeeded Sir Peter Ustinov as Chancellor of the University of Durham in April 2005. His bestsellers include The Lost Continent, Neither Here Nor There, Notes From a Small Island, A Walk in the Woods, Down Under and, most recently, A Short History of Nearly Everything which won the Aventis Prize for Science Books in 2004.

GOR002322895
A Short History of Nearly Everything - Illustrated, A by Bryson, Bill
Bryson, Bill
Used - Very Good
Hardback
Transworld Publishers Ltd
2005-11-01
624
0385609612
9780385609616
Winner of Descartes Prize for Science Communication 2005
Book picture is for illustrative purposes only, actual binding, cover or edition may vary.
This is a used book - there is no escaping the fact it has been read by someone else and it will show signs of wear and previous use. Overall we expect it to be in very good condition, but if you are not entirely satisfied please get in touch with us.