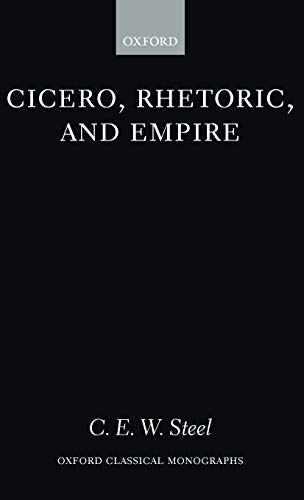 Out of Stock
$148.99
inc. GST
This study of Cicero's political oratory and Roman imperialism in the late Republic offers new readings of neglected speeches. C.E.W. Steel examines the role and capacities of political oratory and puts Cicero's attitude to empire, with its limitations and weaknesses, in the context of wider debates among his contemporaries on the problems of empire.
Very Good
Only 0 left

Cicero manipulated issues relevant to Rome's possession of an empire (provincial extortion, access to citizenship, and the distribution of military commands) in an important group of speeches: the Verrines, de imperio Cn. Pompei, pro Archia, pro Flacco, de provinciis consularibus, and pro Balbo. C.E.W. Steel examines the speeches' rhetorical techniques and aims in detail. Cicero's presentation of empire concentrates on the power wielded by individuals at the expense of wider questions of administrative structures. Thus the problems which arise in the running of an empire can be presented as the result of personal failings rather than endemic to the structures of government - as questions of morality rather than of administration. Steel argues that this concept is fundamentally flawed. The weakness cannot be explained simply as Cicero's lack of insight, but as an inevitable consequence of the uses to which he puts oratory in his political career: comparison with his contemporaries shows other leading figures producing much more radical approaches to the problems of empire.

Her book does, indeed, help us take Cicero's oratory more seriously as negotiations of pressing public issues of the day * Robert W Cape, The Classical Review *
[Steel] must be praised for teasing so many suggestive and nuanced ideas from her evidence. Even those who disagree will be stimulated in the disagreeing, and a wide range of classicists and political historians will want to have a look at this delightful and engaging book. * Journal of Roman Studies *
... an enterprising book on an important topic ... Skilfully weaving historical, rhetorical, and political concerns, Steel handles a wide range of evidence with imagination and acumen. * Journal of Roman Studies *

C.E.W. Steel is Lecturer in Classics, University of Glasgow

Introduction ; 1. Romans in the provinces: power, autonomy, and identity ; 2. How to become a Roman: the cases of Archias and Balbus ; 3. Controlling the uncontrollable: Cicero and the generals ; 4. Portrait of the orator as a great man: Cicero on Cicero ; 5. Imperial contexts ; Epilogue: the limits of oratory

GOR010179791
Cicero, Rhetoric, and Empire by C. E. W. Steel
C. E. W. Steel
Oxford Classical Monographs
Used - Very Good
Hardback
Oxford University Press
2001-04-01
264
0199248478
9780199248476
N/A
Book picture is for illustrative purposes only, actual binding, cover or edition may vary.
This is a used book - there is no escaping the fact it has been read by someone else and it will show signs of wear and previous use. Overall we expect it to be in very good condition, but if you are not entirely satisfied please get in touch with us.