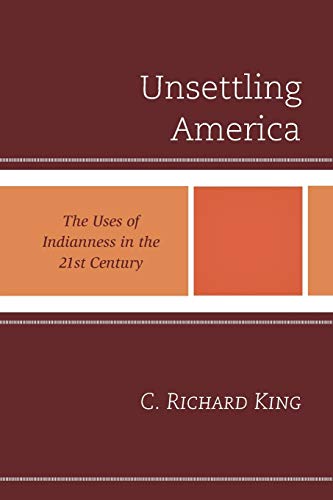 Unsettling America explores the uses of Indianness in the twenty-first century. It concerns itself with images of Native Americans and the ways in which American Indians have interpreted, challenged, and reworked them. Its close readings offer deeper understandings of racism, culture, and sovereignty.

Unsettling America explores the cultural politics of Indianness in the 21st century. It concerns itself with representations of Native Americans in popular culture, the news media, and political debate and the ways in which American Indians have interpreted, challenged, and reworked key ideas about them. It examines the means and meanings of competing uses and understandings of Indianness, unraveling their significance for broader understandings of race and racism, sovereignty and self-determination, and the possibilities of decolonization. To this end, it takes up four themes: *false claims about or on Indianness, that is, distortions, or ongoing stereotyping; *claiming Indianness to advance the culture wars, or how indigenous peoples have figured in post-9/11 political debates; *making claims through metaphors and juxtaposition, or the use of analogy to advance political movements or enhance social visibility; and *reclamations, or exertion of cultural sovereignty.
C. Richard King offers a brilliant example of depth sociology, digging beneath surface realities of Indian mascots and other cultural imagery to deeper white-racist oppression of indigenous Americans, past and present. Stealing lands and killing indigenous peoples has long been accompanied with fictional-Indian framing buttressing Euro-Americans' racial identity and historical rationalizations. King shows, well, how Native Americans' counter-framing and resistance projects assertively seek to reclaim indigenous images, cultures, and lands away from continuing white-racist oppression. -- Joe R. Feagin, Texas A&M University
Once again C. Richard King has created a timely and urgently needed book. Unsettling America reflects on the persistence of representations of American Indians in media and popular culture that must be brought into the light and ultimately changed. This well-written and insightful book should be required reading in ethics, media and communication, and ethnic studies courses. -- Debra Merskin, University of Oregon
In this volume C. Richard King offers an incisive analysis of contemporary struggles over "Indian" imagery, exploring examples that range from advertising to sports arenas to the battlefield, from place names to video games to comic books. This theoretically sophisticated yet accessible book explains why struggles over terms, such as "squaw" and depictions of "redskins," continue to matter in the twenty-first century. It is a timely and important contribution to the multidisciplinary literature on the cultural politics of Indianness. -- Pauline Turner Strong, associate professor, University of Texas at Austin; author of American Indians and the American Imaginary
Unsettling America introduces readers to the myriad ways old traditions of Indian erasure and Indian stereotyping persist into the twenty-first century and manifest in new forms. As important, it highlights the sophisticated Native critiques and activist responses these colonial discourses provoke. -- Chadwick Allen, professor of English, coordinator for the American Indian Studies Program, Ohio State University
This short book explores the persistence of pernicious stereotypes and racial depictions of Native Americans in the twenty-first century in popular culture, advertising, and sports mascots. The author devotes one chapter to the absence of media coverage of Native suffering after Hurricane Katrina and the simultaneous promotion of Mardi Gras 'Indian' tribes of masked African Americans playing Indian. King (ethnic studies, Washington State Univ.) explores marketing campaigns that portray Native Americans as subhuman and savage, and considers the trope of the Indian warrior as a mascot that neoconservatives have appropriated after 9/11 in the war on terror. He examines the peculiar association of enemy combatants-the killing of Osama bin Laden, code named Geronimo EKIA (enemy killed in action), and nineteenth-century Apache resistance. Contemporary Native American intellectuals and activists employ social media, the Internet, and their own media to contest anti-Indianism, debunk stereotypes, and redefine their collective identity and history. King considers these topics in chapters devoted to Native American comic books, the struggle against mascots and place-names, and the use of the pejorative 'squaw' to characterize Indian women. An important consideration of the enduring cultural legacy of white supremacy and settler colonialism, and the strategies of Native resistance. Summing Up: Highly recommended. All levels/libraries. * CHOICE *
Unsettling America would be valuable to any scholar studying media literacy, indigenous rights, representation and appropriation, cultural identity, postcolonialism, decolonization, survivance, or rhetorical sovereignty. * Journal of American Culture *
C. Richard King is a professor in the Department of Critical Culture, Gender, and Race Studies at Washington State University. He is one of the leading scholars of contemporary American Indian Studies, and he also studies race and ethnicity more broadly. A past president of the Society for the Sociology of Sport, he serves on the editorial board for several journals, including Ethnicity and Race in a Changing World, Journal of Popular Culture, and Society of Sport Journal. King is the author/editor of a number of books, including Team Spirits: The Native American Mascot Controversy (2001, a CHOICE 2001 Outstanding Academic Title), Native Americans in Sports (2003), Animating Difference (Rowman & Littlefield 2010), and The Native American Mascot Controversy: A Handbook (Scarecrow 2010).
How Indianness Matters Now: An Introduction I. Old Battles 1. George Bush May Not Like Black People, But No One Gives a Damn About Indigenous Peoples: Visibility and Indianness after the Hurricanes 2. Embattled Images in the Marketplace: Commodity Racism, Media Literacy, and Struggles over Indianness II. Ongoing Wars 3. On Being a Warrior: Race, Gender, and American Indian Imagery in Sport 4. Defending Civilization from the Hostiles: Notes on the Ward Churchill Affair 5. Always Enemy Combatants? The Killing of Osama bin Laden and the Native American Struggle for Humanity III. New Fronts 6. Borrowing Power: Racial Metaphors and the Struggle Against American Indian Mascots 7. Alter/native Heroes: Native American Books, and the Struggle for Self-Definition 8. De/Scribing Squ*w: Indigenous Women and Imperial Idioms in the United States Reclaiming Indianness: Notes Toward a Conclusions
NLS9781442216686
9781442216686
1442216689
Unsettling America: The Uses of Indianness in the 21st Century by C. Richard King, Washington State University
C. Richard King, Washington State University
New
Paperback
Rowman & Littlefield
2015-05-01
164
N/A
Book picture is for illustrative purposes only, actual binding, cover or edition may vary.
This is a new book - be the first to read this copy. With untouched pages and a perfect binding, your brand new copy is ready to be opened for the first time
Trustpilot