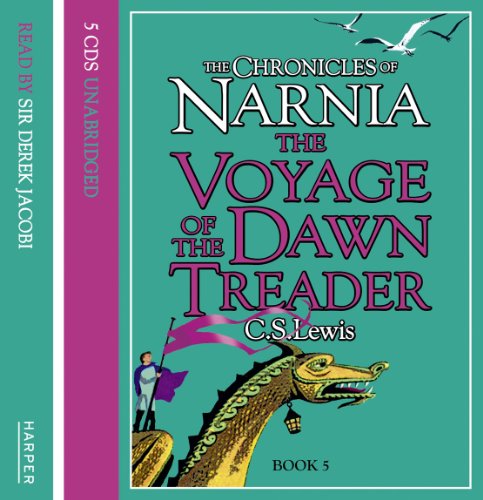 The Voyage of the Dawn Treader by C. S. Lewis

The fifth in the series of the classic fantasy tales - The Chronicles of Narnia. A complete and unabridged edition of this enduringly popular Children's book.

The Voyage of the Dawn Treader (The Chronicles of Narnia) by C. S. Lewis

The fifth in the series of the classic fantasy tales - The Chronicles of Narnia. A complete and unabridged edition of this enduringly popular Children's book.

"Stop it!" cried Eustace. "It's some silly trick you are playing! Ow!" A great cold salt splash had broken right out of the frame and they were breathless from the smack of it, as well as being wet through.

Lucy and Edmund, stuck with their awful cousin Eustace, suddenly find themselves in a picture of a sailing ship - the Dawn Treader - and realise they have been drawn back into the land of Narnia. They are reunited with old friends, the young King Caspian and Reepicheep the mouse on a voyage of discovery to the End of the World...

On 9 December 2005, Andrew (Shrek) Adamson's live-action film adaptation of The Lion, the Witch and the Wardrobe will be released by Disney, and it is already being hailed as the biggest film franchise of all time, guaranteed to appeal to adults and children across the globe. The second film is already in development.

"When I was ten, I read fairy tales in secret. Now that I am fifty I read them openly. When I became a man I put away childish things, including the fear of childishness." C S Lewis

Clive Staples Lewis, born in 1898, wrote many books for adults, though the science fiction Cosmic Trilogy and the Narnia septet were his only works of fiction. The final title, The Last Battle, published in 1956, won the Carnegie Award, the highest mark of excellence in children's literature.

GOR006551430
The Voyage of the Dawn Treader (The Chronicles of Narnia) by C. S. Lewis
C. S. Lewis
The Chronicles of Narnia
Used - Very Good
Hardback
HarperCollins Publishers
2005-06-20
0007206577
9780007206575
N/A
Book picture is for illustrative purposes only, actual binding, cover or edition may vary.
This is a used book - there is no escaping the fact it has been read by someone else and it will show signs of wear and previous use. Overall we expect it to be in very good condition, but if you are not entirely satisfied please get in touch with us.
Trustpilot