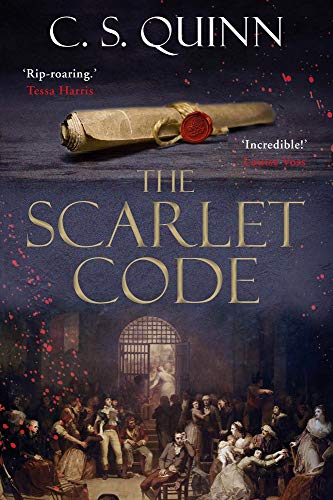 New Price
inc. GST
Free Shipping in Australia
A thrilling sequel to The Bastille Spy, The Scarlet Code is a swashbuckling crime novel set in the early days of the French Revolution.
Reviews:
Trustpilot
New0.00

'Everything you could want from an adventure thriller: excitement, a fabulously endearing heroine and pirate to fall in love with, a cruel killer and... well-written historical detail. Superb.'

As Parisians pick souvenirs from the rubble, a killer stalks the lawless streets. His victims are female aristocrats. His executions use the most terrible methods of the ancient regime.

English spy Attica Morgan is laying low in Paris, helping nobles escape. When her next charge falls victim to the killer's twisted machinations, Attica realises she alone can unmask him. But now it seems his deadly sights are set on her.

As the city prisons empty, and a mob mobilises to storm Versailles, finding a dangerous criminal is never going to be easy. Attica's only hope is to enlist her old ally, reformed pirate Jemmy Avery, to track the killer though his revolutionary haunts. But even with a pirate and her fast knife, it seems Attica might not manage to stay alive.

'A rip-roaring adventure' Tessa Harris on The Bastille Spy

A true treasure of a historical novel... Enjoyable and deeply satisfying with a rich array of characters and a sense of danger which lasts throughout. * Paul Doherty on The Bastille Spy *
A rip-roaring adventure with an exciting new heroine at its heart. * Tessa Harris on The Bastille Spy *
A sparkling extravaganza of a read - fast-paced, exciting and utterly gripping from explosive start to satisfying ending. Lively, intriguing [and] wonderful... I can't wait for the next one. * Joanna Courtney on The Bastille Spy *
Delicious, brilliant and totally absorbing. This pacy, atmospheric thriller... is absolutely unputdownable with its sharp, witty writing and spot on period description. * Carol McGrath on The Bastille Spy *

C. S. Quinn is a travel and lifestyle journalist for The Times, the Guardian and the Mirror, alongside many magazines. Prior to this, Quinn's background in historical research won prestigious postgraduate funding from the British Arts Council. Quinn combines this with her first-hand experiences in far-flung places to create her bestselling The Thief Taker series.