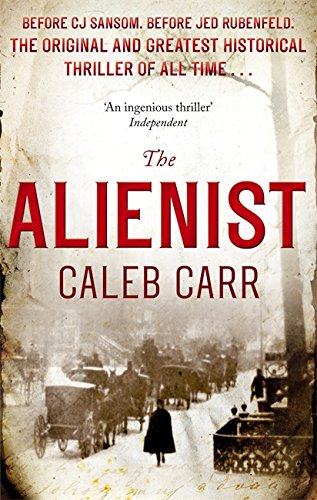 The Alienist
by Caleb Carr

Used Price
$18.49
inc. GST
Free Shipping in Australia
Reissue of this ground-breaking historical whodunnit, in which 1890s New York is as much a character as the investigators
Reviews:
Trustpilot
Good

The Alienist: Number 1 in series by Caleb Carr

Unfortunately for Police Commissioner Theodore Roosevelt, the psychological profiling of murderers is a practice still in its infancy, struggling to make headway against the prejudices of those who prefer the mentally ill - and the 'alienists' who treat them - to be out of sight as well as out of mind.

But as the body count rises, Roosevelt swallows his doubts and turns to the eminent alienist Dr Laszlo Kreizler to put a stop to the bloody murders - giving Kreizler a chance to take him further into the dark heart of criminality, and one step closer to death.

"You can smell the fear in the air." --"The New York Times"
"Gripping, atmospheric, intelligent, and entertaining." --"USA Today"

"From the Paperback edition."

Caleb Carr was born in New England in 1951 and now lives in New York. He was a military historian, teaching at Columbia, before the success of his first novel enabled him to become a full-time writer.

GOR003419523
The Alienist: Number 1 in series by Caleb Carr
Caleb Carr
Laszlo Kreizler & John Schuyler Moore
Used - Good
Paperback
Little, Brown Book Group
2011-09-01
544
0751547220
9780751547221
N/A
Book picture is for illustrative purposes only, actual binding, cover or edition may vary.
The book has been read but remains in clean condition. All pages are intact and the cover is intact. Some minor wear to the spine.