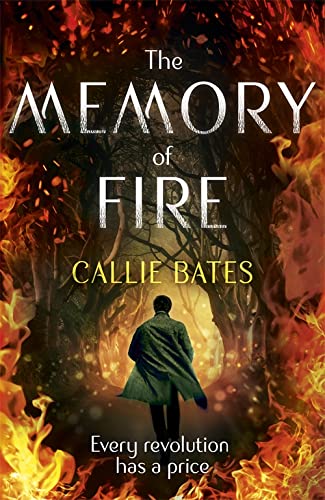 The Memory of Fire by Callie Bates

Magic. Romance. Revolution. The sequel to the bold and gorgeous The Waking Land and perfect for fans of An Ember in the Ashes and Green Rider

The Memory of Fire: The Waking Land Book II by Callie Bates

Magic. Romance. Revolution. The sequel to the bold and gorgeous The Waking Land.

'Bates is an author well worth watching' Robin Hobb

Jahan Korakides is the hero who saved the life of the crown prince in battle, helped win the revolution in Eren and earned the heart of Elanna, the legendary Wildegarde reborn.

But Jahan Korakides is also broken; haunted by memories of the woman who experimented on him and his brothers as children.

So when the empire threatens war in retribution for Elanna's illegal sorcery, Jahan leaves Eren to negotiate with the emperor on Queen Sophy's behalf. But the world he left has changed - riots rock the city of Ida, his brother is missing and the crown prince refuses to speak to him.

Jahan's only hope of success seems to lie with the rebels in Ida. Yet, if he joins them, he will merely spur on the war he's desperate to avoid, and risk revealing himself as a sorcerer.

And then the witch hunters arrive at court, bringing Elanna in chains.

Gripping . . . a remarkably mature, balanced addition to the story that will leave readers hungry for the conclusion. * Publisher's Weekly *
Well-written and immersive * Fictionist Magazine *
A beautiful expansion of a promising story . . . rich and captivating. Putting it down is likely to be the biggest challenge readers will encounter. * Books, Vertigo & Tea *
An amazing follow-up to The Waking Land and proves that revolution cannot be localized. * All Things Urban Fantasy *
Riveting * Hypable *
PRAISE FOR THE WAKING LAND SERIES:
Gripping... a remarkably mature, balanced addition to the story * Publisher's Weekly Starred *
Jump on the wagon now, because I think Bates is an author well worth watching. -- Robin Hobb
A simmering tale of magic that builds to a raging inferno, and hits like a cross between Brandon Sanderson and Pierce Brown. -- Scott Sigler on The Waking Land
Clearly a writer of real talent. * Terry Brooks *
A heartbreaking, enchanting, edge-of-the-seat read that held me captive from start to finish! -- Tamora Pierce on The Waking Land
Callie Bates is a writer, harpist and certified harp therapist, sometimes artist, and nature nerd. When she's not creating, she's hitting the trails or streets and exploring new places. She lives in the Upper Midwest. THE MEMORY OF FIRE is the sequel to her debut fantasy novel, THE WAKING LAND. She occasionally writes nonfiction. Her essays have appeared in Shambhala Sun, The Best Buddhist Writing 2012, All Things Girl and online journals.
GOR009150329
9781473638815
147363881X
The Memory of Fire: The Waking Land Book II by Callie Bates
Callie Bates
The Waking Land Series
Used - Very Good
Paperback
Hodder & Stoughton
2018-06-05
448
N/A
Book picture is for illustrative purposes only, actual binding, cover or edition may vary.
This is a used book - there is no escaping the fact it has been read by someone else and it will show signs of wear and previous use. Overall we expect it to be in very good condition, but if you are not entirely satisfied please get in touch with us
Trustpilot