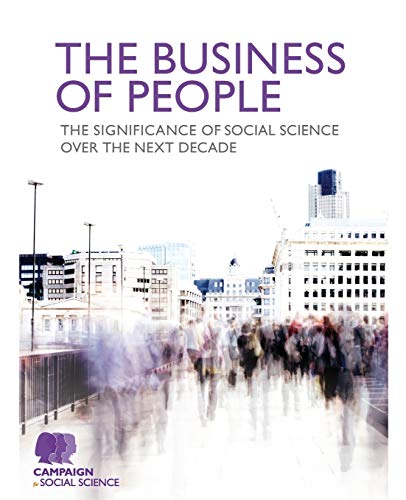 The Business of People
by Campaign for Social Science

Used Price
$14.49
inc. GST
Free Shipping in Australia
Tackling infectious disease, understanding radicalisation, improving productivity, getting people to save for retirement and nearly all the issues facing the UK, this book outlines the size and structure of UK social science, how social science graduates are essential to the work of firms, government and the third sector.
Reviews:
Trustpilot
Well Read

The Business of People Summary

The Business of People: The significance of social science over the next decade by Campaign for Social Science

Tackling infectious disease, understanding radicalisation, improving productivity, siting new airport capacity, getting people to save for retirement - nearly all the issues facing the UK now and in the near future demand the urgent attention of those trained to study human processes. In short, we need sharp social science now more than ever.

The Business of People looks at the backdrop to the UK elections taking place in May 2015 to argue that we need to invest in science and innovation - not just for the sake of `UK plc' and prospects for growth and economic recovery, but to inform debate and policymaking on migration, housing, devolution of power within the UK, and the UK's position in Europe.

The report sets out the need for new economic and social knowledge and illustrates the many ways in which social scientists are contributing to changing practice and deepening knowledge. It outlines the size and structure of UK social science, its contribution to GDP, how social science graduates are essential to the work of firms, government and the third sector.

The report ends with a set of recommendations for the next few years - urgent reading for the next government - on research funding, social science capacity and the use of expert advice by government.

An open access electronic version of the report is downloadable from http://campaignforsocialscience.org.uk/businessofpeople/


Customer Reviews - The Business of People

About Campaign for Social Science

The Campaign for Social Science was launched in 2011 to advocate social science to the UK Government and to the public, at a time of significant change in the higher education system. It campaigns for the restoration of the post of Government Chief Social Science Advisor and the retention of large-scale longitudinal research programmes. It also promotes social science in the media and on the web and organises road shows and other events to emphasise the value of social science. As of January 2015, the Campaign was supported by 80 universities, learned societies, charities and publishers. See http://campaignforsocialscience.org.uk/ for more information.

GOR010756489
The Business of People: The significance of social science over the next decade by Campaign for Social Science
Campaign for Social Science
Used - Well Read
Paperback
SAGE Publications Ltd
2015-02-23
48
1473918820
9781473918825
N/A
Book picture is for illustrative purposes only, actual binding, cover or edition may vary.
This is a used book. We do our best to provide good quality books for you to read, but there is no escaping the fact that it has been owned and read by someone else previously. Therefore it will show signs of wear and may be an ex library book.