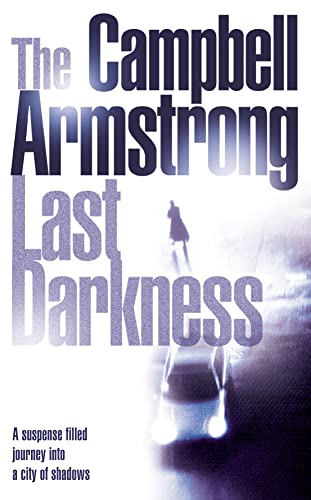 The Last Darkness
by Campbell Armstrong

It's winter in Glasgow, and someone is killing prominent members of the city's business community in this haunting, atmospheric new thriller from the bestselling author of The Bad Fire and Jig.

The Last Darkness by Campbell Armstrong

It's winter in Glasgow, and someone is killing prominent members of the city's business community in this haunting, atmospheric new thriller from the bestselling author of The Bad Fire and Jig.

Glasgow December, all freezing rains and sleet that bites like schools of piranha. In this city of icy pavements and Christmas street decorations battered by arctic winds, the body of a well-dressed man is found hanging from the girders of a railway bridge...

Investigating the case is Lou Perlman, a detective whose idea of a good suit is anything that fits him. Perlman feels that this is no suicide, and that something about the corpse reminds him of his boyhood in the old Gorbals. Perlman is a man with secrets of his own and, as one death follows another, the hunt for the killer takes him into a territory of deceit and greed - a world of old allegiances that are lethal to reawaken.

`Campbell Armstrong, one of Britain's most popular thriller writers, returns with a riveting new story. The Last Darkness is so atmospheric you really do lose your sense of time and place as you delve deeper into Perlman's world. The dialogue and tension are superbly crafted, and Perlman is a believable, well-rounded character. A terrific read.'
Publishing News

`Armstrong is a wonderfully atmospheric writer who shines a light into the dark corners of the human heart.' Sunday Telegraph

`He not only has a whiplash style, he also has a gift for understanding character, and his dialogue rings true.' New York Times

`Armstrong is among the most intriguing of blockbuster writers... near to unputdownable' GQ

`Armstrong has discovered a way with words that raises him above the routine level of the marketplace.' The Times

Campbell Armstrong was born in Glasgow and educated at Sussex University. After living in the USA for twenty years, he now lives in Ireland. He has been in the front rank of modern thriller writers for many years, and his bestselling novels include the highly acclaimed Jig series. His recent heartbreaking memoir, All That Really Matters, was also a remarkable success, particularly in Scotland and Ireland, where it was a No 1 bestseller.

GOR002182063
The Last Darkness by Campbell Armstrong
Campbell Armstrong
Used - Very Good
Paperback
HarperCollins Publishers
2003-06-02
480
0006514987
9780006514985
N/A
Book picture is for illustrative purposes only, actual binding, cover or edition may vary.
This is a used book - there is no escaping the fact it has been read by someone else and it will show signs of wear and previous use. Overall we expect it to be in very good condition, but if you are not entirely satisfied please get in touch with us.