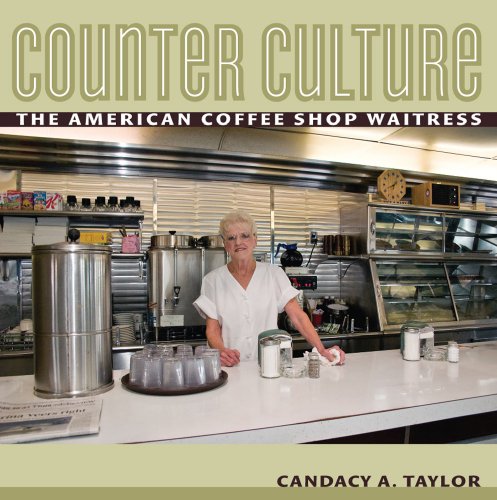 "Career waitresses do more than just serve food. They are part psychiatrist, part grandmother, part friend, and they serve every walk of American life: from the retired and the widowed, to the wounded and the lonely, and from the working class to the...

"Career waitresses do more than just serve food. They are part psychiatrist, part grandmother, part friend, and they serve every walk of American life: from the retired and the widowed, to the wounded and the lonely, and from the working class to the wealthy. The classic diner waitress is an icon of American culture.... This book takes a moment to honor and recognize waitresses' contribution to our communities. Doing this project has helped me to redefine my perspective on life, work, and happiness. It has made me reevaluate the myth of the American dream that says you need to have an 'important' job to be happy."-from Counter Culture

In large cities and small towns across the country, the best diners and coffee shops are more than just restaurants: they are neighborhood institutions that bring together communities. From the Gold 'N Silver Inn in Reno, Nevada to the U.S.A. Country Diner in Windsor, New Jersey, these special places are not defined by their menus or decor, but by the waitresses who have establish bonds with their customers and their communities over years-and sometimes decades-of service. Counter Culture is a window into the lives of career waitresses who have worked in diners and coffee shops for up to sixty years. Since 2001, Candacy A. Taylor (a former waitress herself) has traveled more than 26,000 miles throughout the United States collecting stories of these "lifers," as many waitresses aged fifty or over playfully call themselves. She interviewed fifty-seven waitresses in thirty-eight towns and cities. Their compelling stories are complemented and enhanced by Taylor's striking color photographs of the waitresses at work.

Taylor expected that the waitresses she'd meet would feel overworked and underappreciated, but was surprised and delighted to find that the opposite was true. The proud, capable waitresses Taylor interviewed loved their jobs and, even if given the opportunity, "wouldn't do anything else." Nearly all the waitresses said that the physical labor of waitressing helped them to age more gracefully and that the daily contact with customers and coworkers kept them socially engaged. Lifers generally make more money from serving regular customers with whom they forge bonds over decades and their seniority earns them respect from their coworkers and managers. Taylor's sensitive and respectful portrayal of career waitresses who have turned their jobs into a rewarding lifetime pursuit turns Counter Culture into an invaluable portrait of the continued importance of community in our changing society.

"A loving ode to women who are the heart and soul of America's diners, Counter Culture is a treasure for all who value food with character, served by real characters. Its stories about veteran waitresses are fun, poignant, and tremendously informative, including detailed information about the unique talents required for the job. The evocative photographs of these rare personalities and their workplaces are a siren call to hit the road and meet them while they're still around."

"Oral historian, photographer and former waitress Taylor turned her aching joints into the springboard for a mission: uncovering the experiences of diner waitresses in this sociological overview. Most are 'lifers,' now senior citizens who abhor the idea of retirement. Others may see these women as uneducated service workers, but waitresses see themselves as psychologists, nurses, and family to their beloved regulars, who expect a little sass with their ham and eggs. Along with their extraordinary work ethic and oversized personalities, there are reminders of the occupational reality of below-minimum wages (which must be supplemented by substantial tips) and lack of medical and retirement benefits (which might be one reason these lifers just can't stay away from their greasy spoons). With color photographs (mostly by Taylor) of waitresses in their diners on almost every page plus feisty first-person anecdotes about how the women handle nasty customers and customers who sneak out without paying the bill (one waitress threw a ketchup bottle at them), this unique perspective is much like the professional diner waitress-difficult to pigeonhole, impossible to ignore."

Candacy A. Taylor is an award-winning photographer, writer, and visual artist. For eight years she has produced multimedia ethnography and oral history projects that challenge common stereotypes of women and class. She has conducted research for National Geographic and the Library of Congress and has received numerous grants for her work, including two Story Fund grants from the California Council for the Humanities. To learn more about Taylor's work or to participate in her community blog on coffee shop culture, visit: www.taylormadeculture.com.

GOR011241839
9780801474408
080147440X
Counter Culture: The American Coffee Shop Waitress by Candacy Taylor
Candacy Taylor
Used - Like New
Paperback
Cornell University Press
2009-08-06
156
N/A
Book picture is for illustrative purposes only, actual binding, cover or edition may vary.
The book has been read, but looks new. The book cover has no visible wear, and the dust jacket is included if applicable. No missing or damaged pages, no tears, possible very minimal creasing, no underlining or highlighting of text, and no writing in the margins
Trustpilot