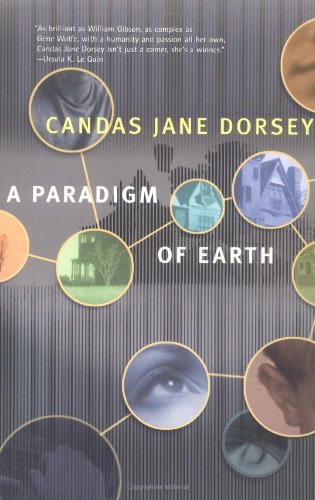 A Paradigm of Earth
by Candas Jane Dorsey

Used Price
$47.99
inc. GST
Free Shipping in Australia
A science fiction parable about a household of political outcasts in a mid-western Canadian city, set in the near future when society is dominated by political and social conservatism. A humanoid alien infant comes to live in the house - with all the attendant government surveillance.
Very Good

A Paradigm of Earth Summary

A Paradigm of Earth by Candas Jane Dorsey

Candas Jane Dorsey returns with a literary SF parable about a household of political outcasts in a mid-western Canadian city in a near future when political and social conservatism dominate society. That humanoid alien infants have been brought to Earth to be given into the care of major Earth governments is stunning but distant news - until one of them comes to live in the house, with all the attendant government surveillance. This is also the story of one bisexual woman who believes that humans can live together in better ways.

A Paradigm of Earth Reviews

"As brilliant as William Gibson, as complex as Gene Wolfe, with a humanity and passion all her own, Candas Jane Dorsey isn't just a comer, she's a winner."
--Ursula K. Le Guin
"This tale of growth and discovery by the author of " Black Wine" pays tribute to such SF classics as Robert Heinlein's "Stranger in a Strange Land" and the philosophical novels of Theodore Sturgeon." -"Library Journal"
"Of the aliens outside Earth's atmosphere, all any of us can do is guess. Of the "aliens "among us, we can do far more than we have to understand and accept. Authors have made an attempt at bridging that gap; few have done it as perceptively and deftly as Candas Jane Dorsey has in this ground-breaking novel. . . . Readers will get the best portrayal of bisexuals ever to come to print. Certainly, it is a landmark in the literary treatment of this group. . . . A fresh look at the nature of what may be out there and those that are already among us? It's a huge task to ask of a novel or a novelist, but "A Paradigm of Earth" pulls it off in a dazzling, entrancing fashion. And, somehow, Dorsey gives off the impression that it is all so easy. Isn't that a definition of genius?"--"SFSite.com"

GOR005760155
A Paradigm of Earth by Candas Jane Dorsey
Candas Jane Dorsey
Used - Very Good
Paperback
St Martin's Press
2002-11-27
368
0312877978
9780312877972
N/A
Book picture is for illustrative purposes only, actual binding, cover or edition may vary.
This is a used book - there is no escaping the fact it has been read by someone else and it will show signs of wear and previous use. Overall we expect it to be in very good condition, but if you are not entirely satisfied please get in touch with us.