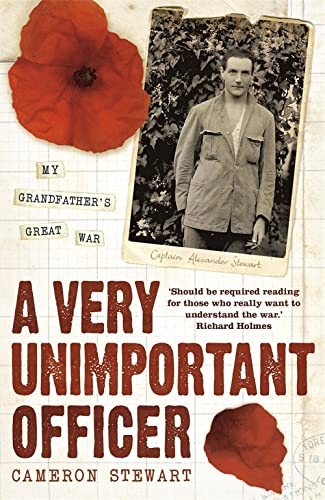 In Stock
$10.99
+10% GST
The extraordinary letters and diaries of Captain Alexander Stewart, who served during the First World War - a vivid and moving picture of trench warfare.
Very Good Good
9 in stock

Rediscovered after 80 years gathering dust on a family bookshelf and first brought to public attention on BBC Radio 4's Today Programme, A VERY UNIMPORTANT OFFICER is a detailed and intimate account of the experience of Captain Stewart, an ordinary officer in the front line in France and Flanders throughout 1916 and 1917.

Recruited to The Cameronians (Scottish Rifles) in 1915 at the age of 33, Captain Stewart went 'over the top' many times, outliving 'so many better men', as he says with typical humility.

Through his vivid testimony we learn of the mud ('more like thick slime'), the flies and the difficulties of suffering dysentry while on horseback. In one memorable passage he describes engaging the enemy while smoking a pipe - an episode for which he was awarded the Military Cross.

Yet through the chaos and horror of the trenches, Captain Stewart reflects with compassion on the fears and immense courage of the men under his command.

Newly edited by his grandson, Cameron Stewart, A VERY UNIMPORTANT OFFICER gives us a fascinating insight into the horrors and absurdities of trench life.

The immediacy, candour and sheer literary merit of his journals make this an important new source for the Great War . . . a very remarkable man. * Evening Standard *
something unusual and fresh on the subject of the Great War . . . edited sympathetically and unobtrusively by his grandson. * The Times *
A vivid account of an infantry officer's war on the Western Front . . . should be required reading for those who really want to understand the war. * Richard Holmes, author of Tommy: The British Soldier on the Western Front *
His trench diaries show a different aspect of World War I from the usual images of industrial massacre. * Time Out *

Cameron Stewart is Captain Alexander Stewart's grandson. An actor who has worked extensively in UK television and theatre, he can frequently be heard on BBC Radio 4 and the World Service.

GOR002007426
A Very Unimportant Officer by Captain Alexander Stewart
Captain Alexander Stewart
Used - Very Good
Paperback
Hodder & Stoughton General Division
2009-05-14
336
0340977124
9780340977125
N/A
Book picture is for illustrative purposes only, actual binding, cover or edition may vary.
This is a used book - there is no escaping the fact it has been read by someone else and it will show signs of wear and previous use. Overall we expect it to be in very good condition, but if you are not entirely satisfied please get in touch with us.