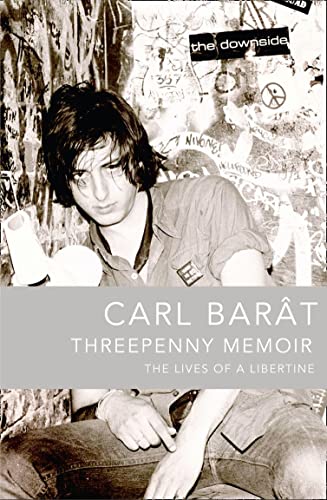 'Looking back at The Libertines is like catching flashes of sunlight between buildings as you race by on a train. An old film reel where the spools are weathered and worn, leaving empty frames on the screen...'

Threepenny Memoir: The Lives of a Libertine by Carl Barat

'Looking back at The Libertines is like catching flashes of sunlight between buildings as you race by on a train. An old film reel where the spools are weathered and worn, leaving empty frames on the screen...'

In the final years of the last millennium, Carl Barat and Pete Doherty forged a deep musical bond, formed The Libertines and set sail for Arcadia in the good ship Albion; a decade later, Carl would emerge from his second band, the Dirty Pretty Things, after one of the most significant - and turbulent - rock 'n' roll trajectories of recent times. Threepenny Memoir navigates the choppy waters of memory, and gives an inside look at life in the eye of the storm, chronicling how a pair of romantics armed with little more than poetry and a punk attitude inspired adoration in millions worldwide - and proceeded to tear apart everything they had.

With unflinching honesty but real warmth, Carl - who has recently performed with The Libertines for the first time since 2004, and released a solo album - looks back at the creative highs and the drug-addled lows of life with both bands, as well as giving an intimate account of the people and places that have informed his songwriting. From Camden bedsits, impromptu gigs and minesweeping drinks in the Dublin Castle to Japanese groupies, benders in Moscow and chatting to Slash, Threepenny Memoir charts a fantastic course through recent musical history. And, in the aftermath, Carl reflects on the pressures - both external and self-inflicted - that led to each band's demise, and on the challenges and rewards that life as a solo artist now holds.

Carl Barat is an English musician and actor. He was the frontman and lead singer of Dirty Pretty Things and was co-frontman of The Libertines.

GOR002829491
Threepenny Memoir: The Lives of a Libertine by Carl Barat
Carl Barat
Used - Very Good
Paperback
HarperCollins Publishers
2010-09-30
300
0007393768
9780007393763
N/A
Book picture is for illustrative purposes only, actual binding, cover or edition may vary.
This is a used book - there is no escaping the fact it has been read by someone else and it will show signs of wear and previous use. Overall we expect it to be in very good condition, but if you are not entirely satisfied please get in touch with us.