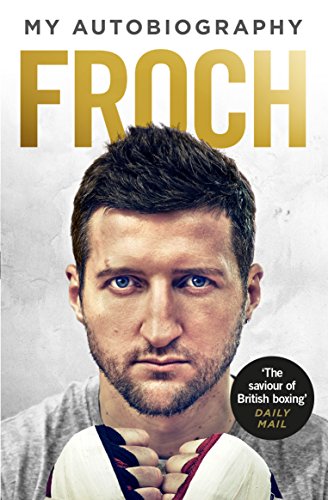 In Stock
$20.49
inc. GST
When Carl Froch defeated George Groves in their Wembley Stadium re-match in front of 80,000 fans, it went down as the biggest fight in British boxing history, cementing Carl's place as our greatest boxer. This book tells the story of how he fought his way through sheer guts and determination to the summit of the boxing world.
Very Good Good
8 in stock

Froch: My Autobiography by Carl Froch

When Carl Froch defeated George Groves in their Wembley Stadium re-match in front of 80,000 fans, it went down as the biggest fight in British boxing history, cementing Carl's place as our greatest boxer - a pure warrior who has never accepted the easy way.

Carl grew up a tough kid on a Nottingham estate, where boxing helped to keep him out of trouble. His incredible natural ability soon led to a world amateur medal before he turned pro and embarked on a long journey with his mentor and corner man Rob McCracken.

Carl's career has always been defined by taking on the odds with blisteringly tough fights. He was never scared to fight in someone else's backyard and always faced the hardest opponents to prove himself - Jean Pascal, Arthur Abraham, Andre Ward, Lucien Bute and his incredible last round knock-out of Jermain Taylor.

But of course he will always be remembered for his showdowns with the great Dane Mikkel Kessler and then George Groves, avenging his initial points defeat by Kessler and finishing Groves for a second time with one of the greatest punches in British boxing history.

Froch was first a local and now a national hero and here he tells the story of how he fought his way through sheer guts and determination to the summit of the boxing world.

PREVIOUSLY PUBLISHED AS THE COBRA - NOW FULLY REVISED AND UPDATED

The saviour of British boxing * Daily Mail *
Carl has fought, without doubt, the toughest list of world class fighters in succession. No other British fighter in history can claim such a record * David Haye *
One of the finest fighters on the planet * Guardian *

Carl Froch was born in Nottingham in 1977. He is a four-time world champion at super middleweight and currently holds the WBA and IBF belts. His professional record is 33 wins (24 by knock-out) and 2 losses. He lives with his partner Rachael and their two children Rocco and Natalia.

Niall Hickman is the boxing correspondent for the Daily Express. He previously worked with Ricky Hatton on his autobiography The Hitman.

GOR007000042
Froch: My Autobiography by Carl Froch
Carl Froch
Used - Very Good
Paperback
Ebury Publishing
2015-05-07
368
0091960371
9780091960377
N/A
Book picture is for illustrative purposes only, actual binding, cover or edition may vary.
This is a used book - there is no escaping the fact it has been read by someone else and it will show signs of wear and previous use. Overall we expect it to be in very good condition, but if you are not entirely satisfied please get in touch with us.