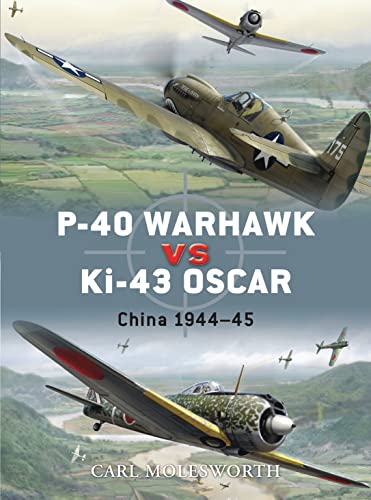 Known for the distinctive sharkmouths decoration on their noses, P-40 fighters first saw combat in China during World War II.Their most common adversary was the Japanese Nakajima Ki-43, nicknamed Oscar. Carl Molesworth describes and explains the design and development of these two foes, the products of two vastly different philosophies of fighter design. The P-40 was heavily armed and sturdy with armor protection and self-sealing fuel tanks, but paid for this with the loss of speed and a sluggish performance at altitude. The Ki-43 was a rapier to the battleaxe P-40 and the Ki-43 was immensely nimble, though with less firepower and durability. This book examines these two different fighters, and the pilots who flew them over China, with an action-packed text, rare photographs and digital artwork.

"I recommend this book to all military aviation enthusiasts. Like many Osprey books, P-40 Warhawk vs Ki-43 Oscar should be a useful title as reference for modelers as well." --C. Peter Chen, World War II Database (May 2008)

"This is excellent book as far as I am concerned. It not only relates the technical details and development of each aircraft it also informs on the actions that took part in this less than centre stage theatre of World War Two. Recommended." --Rodger Kelly, Hyperscale (May 2008)

"In all, a superlative inclusion to this series and one that I know you will find useful." --Scott Van Aken, modelingmadness.com (April 2008)

"Both early designs that were outdated by other types, [the P-40 and the Ki-43] still had plenty of fight in them when they clashed during the air war supporting the Japanese Ichi-Go campaign in 1944. During this campaign, the P-40 and Ki-43 engaged in some of the toughest dogfights in China... [A] great companion to the other titles detailing the specific aircraft and can become an important part of any aviation reference library." --Chris BanyaiRiepl, Internet Modeler (April 2008)

GOR003420206
P-40 Warhawk vs Ki-43 Oscar by Carl Molesworth
Carl Molesworth
Duel
Used - Very Good
Paperback
Bloomsbury Publishing PLC
2008-03-05
80
1846032954
9781846032950
N/A
Book picture is for illustrative purposes only, actual binding, cover or edition may vary.
This is a used book - there is no escaping the fact it has been read by someone else and it will show signs of wear and previous use. Overall we expect it to be in very good condition, but if you are not entirely satisfied please get in touch with us.