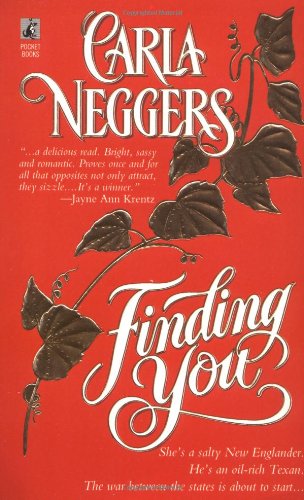 Finding You
by Carla Neggers

Out of Stock
$35.99
inc. GST
Vermont newspaper editor Cozie Hawthorne is a very traditional New England woman. Daniel Foxworth, renegade son of the Texas oil Foxworths, specializes in putting out fires. But when the two meet, it's spontaneous combustion--and despite raging differences, they can't douse their burning, all-consuming passion.
Very Good
Only 0 left

Finding You by Carla Neggers

Vermont newspaper editor Cozie Hawthorne was shocked at the money she made when her book of Yankee cracker-barrel wisdom hit the bestseller lists. That didn't mean she was ready to buy a dress that cost more than her rusted jeep. She prided herself on her traditional values. Her house was built in 1790. Sometimes she thought the last interesting man she met was around that date too....
Daniel Foxworth, renegade son of the Texas oil Foxworths, specialized in putting out fires. At least he did until someone sabotaged his helicopter and darn near killed him. His major suspect was Cozie Hawthorne's brother Seth. His major problem was that his suspect's sister had gotten under his skin. But when Cozie found out what the tall, dark, and sexy Texan was doing, Daniel would face his greatest challenge: to win her trust and turn hot-blooded anger into all-consuming passion....
"Finding You, " the long-awaited new novel by the bestselling and award-winning romance author Carla Neggers, has everything her millions of fans enjoy -- wickedly funny dialogue, non-stop suspense, and a deliciously spicy love story guaranteed to make your heart beat faster!

Carla Neggers is the New York Times bestselling author of more than seventy-five novels, including her popular Sharpe & Donovan and Swift River Valley series. Her books have been translated into dozens of languages and sold in over thirty-five countries. Carla is a founding member of the New England Chapter of Romance Writers of America and has served as vice president of International Thriller Writers and president of Novelists, Inc. She has received multiple awards for her writing and is a recipient of the RT Book Reviews Career Achievement Award for romantic suspense. She and her husband divide their time between Boston, home to their two grown children and three young grandchildren, and their hilltop home in Vermont.

GOR002159255
Finding You by Carla Neggers
Carla Neggers
Used - Very Good
Paperback
Unknown
0
0671883208
9780671883201
N/A
Book picture is for illustrative purposes only, actual binding, cover or edition may vary.
This is a used book - there is no escaping the fact it has been read by someone else and it will show signs of wear and previous use. Overall we expect it to be in very good condition, but if you are not entirely satisfied please get in touch with us.