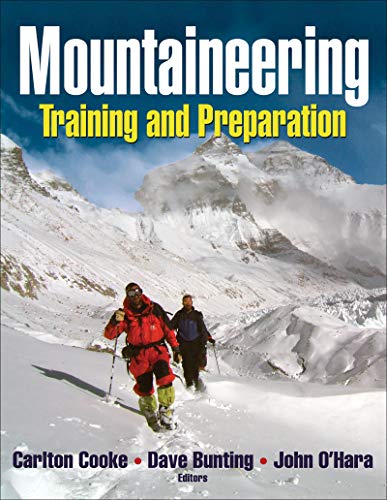 Mountaineering covers planning, coordination, and conditioning for mountaineering. It's based on the experiences of editors Carlton Cooke, Dave Bunting, and John O'Hara and the 2006 British Army West Ridge Expedition, which was chronicled on TV in Britain. Sport and exercise scientists at LeedsMetropolitan University contribute to the text.

Whether you're an experienced mountaineer, a hardened climber, or about to embark on your first expedition, nothing is more critical than anticipating, understanding, and preparing for the adversities and accomplishments that await you and your team.

In Mountaineering: Training and Preparation, Carlton Cooke, Dave Bunting, and John O'Hara, along with the members of the British Army Everest West Ridge Expedition team and sport and exercise scientists from LeedsMetropolitan University, share their insights, experiences, and expertise on these aspects of mountaineering:

- Selecting the right team for each expedition

- Nutritional strategies for your training and expeditions

- Preparing for and surviving in extreme conditions

From the technical aspects of a climb to the leadership and teamwork skills so essential to success, this comprehensive guide covers all of the essentials for a safe and successful expedition.

Mountaineering: Training and Preparation is must-read for every mountaineer. Read it before your next expedition.

Carlton Cooke is the director of university research, Carnegie professor of sport and exercise science, and head of the Carnegie Research Centre for Performance Sport at LeedsMetropolitanUniversity.

Carlton has presented and published extensively on aspects of sport performance, physical activity, exercise, and health, principally in the areas of exercise physiology and biomechanics. He has worked with a range of partners in high-performance sport in facilitating, developing, and delivering support and research in sport science. He worked with a team of sport and exercise scientists from LeedsMetropolitan University in support of the British Army expedition to Everest West Ridge in 2006. The university continues to support preparations for army expeditions and other expeditions in the outdoors as well as commit to optimizing the role of the outdoors in higher education through the Carnegie Great Outdoors. Carlton has participated and competed in various outdoor sports and activities and continues to enjoy the outdoors both professionally and recreationally.

Dave Bunting is director of training and cofounder of My Peak Potential, an experiential learning and development centre in the Bavarian Alps of Southern Germany. He served 24 years in the British Army, predominantly within the Army Physical Training Corps, where he became a specialist in mountain leadership training. He has instructed in mountain training centres in Wales, Norway, Canada, and Bavaria. In Bavaria, he undertook the arduous year-long German Army Mountain Guide's (Heeresbergfuhrer) course, becoming one of only a few British soldiers to have gained this prestigious qualification. Dave has a passion for mountaineering and has been involved in the organisation and execution of numerous expeditions, including 10 to the Himalayas. In 2006 Bunting led an elite selection of climbers from the British Army on a groundbreaking expedition in an attempt to become the first British team to climb the formidable West Ridge of Mount Everest. As expedition leader, Dave headed up the planning, team selection and preparation, and he was a strong member of the climbing team. This highly publicised expedition earned Dave an MBE and was filmed for the televised documentary Everest: Man vs. Mountain.

Dr. John O'Hara is a senior lecturer in sport performance physiology within the Carnegie faculty of sport and education at Leeds Metropolitan University. His PhD was on carbohydrate ingestion and endurance performance. He is a sport and exercise scientist accredited with the British Association of Sport and Exercise Sciences. His research interests are focused on carbohydrate metabolism, hydration status, limiting factors for sport performance and the preparation of athletes for extreme sporting challenges. As a hill walker, mountain biker and climber, he has a keen interest in the outdoors. John has been on two Himalayan expeditions: Yala Peak (5500 m) and a climb to camp 1 on the lower slopes of Mount Everest (6100 m) with the Everest West Ridge 2006 team. He has also summited Mount Killimanjaro (5895 m). Through his cumulative experiences in academia and in the great outdoors, he led, developed, managed and delivered the multidisciplinary support services to the Everest West Ridge 2006 team, which included physiological, nutritional and psychological support. Since then, he has provided a similar level of support to other Army Mountaineering Assoociation expeditions and other sporting disciplines, such as the Vendee Globe 2008, a round-the-world single-handed sailing race.

GOR003016019
Mountaineering: Training and Preparation by Carlton Cooke
Carlton Cooke
Used - Very Good
Paperback
Human Kinetics Publishers
2010-02-01
288
073608469X
9780736084697
N/A
Book picture is for illustrative purposes only, actual binding, cover or edition may vary.
This is a used book - there is no escaping the fact it has been read by someone else and it will show signs of wear and previous use. Overall we expect it to be in very good condition, but if you are not entirely satisfied please get in touch with us.