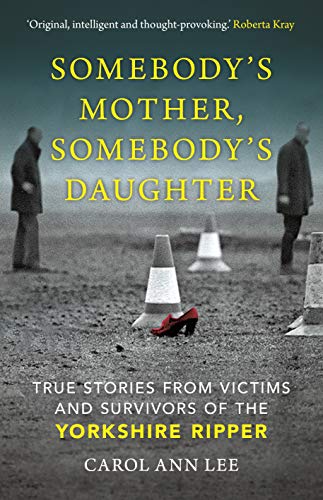 Used Price
$31.99
inc. GST
Free Shipping in Australia
Somebody's Mother, Somebody's Daughter tells, for the first time, the stories of those women who came into Peter Sutcliffe's murderous orbit, restoring their individuality to them and giving a voice to their families, including the twenty-three children whom he left motherless.
Reviews:
Trustpilot
Very Good

Much has been written about the brutal crimes of Peter Sutcliffe, the Yorkshire Ripper, and - thirty-five years after he was sentenced to life imprisonment for the murder of thirteen women - scarcely a week goes by without some mention of him in the media. In any story featuring Sutcliffe, however, his victims are incidental, often reduced to a tableau of nameless faces. But each woman was much more than the manner of her death.

In Somebody's Mother, Somebody's Daughter, Carol Ann Lee tells, for the first time, the stories of those women who came into Sutcliffe's murderous orbit, restoring their individuality to them and giving a voice to their families, including the twenty-three children whom he left motherless.

Based on previously unpublished material and fresh, first-hand interviews the book examines the Yorkshire Ripper story from a new perspective: focusing on the women and putting the reader in a similar position to those who lived through that time. By talking to survivors and their families, and to the families of the murdered women, Carol Ann Lee gets to the core truths of their lives and experiences, not only at the hands of Sutcliffe but also with the Yorkshire Police and their crass and appalling handling of the case, where the women were put into two categories: prostitutes and non-prostitutes. In this book they are, simply, women, and all have moving backstories.

Recent news stories have shown that women and girls who come forward to report serious crimes of a sexual nature are often judged as harshly - and often more so - than the men who have wronged them. The Rochdale sex abuse scandal, the allegations against Harvey Weinstein, and the US President's deplorable comments about women are vivid reminders that those in positions of power regard women as second class citizens. The son of Wilma McCann, Sutcliffe's first known murder victim, told the author, 'We still have a very long way to go,' and in that regard he is correct. Hard-hitting and wholly unique in approach, this timely book sheds new light on a case that still grips the nation.

Born in Wakefield, Yorkshire, in 1969, Carol Ann Lee graduated from Manchester University. Three years later, her first book, Roses from the Earth: The Biography of Anne Frank was published to great acclaim, and has been published in fifteen countries to date. She went on to write several more best-selling books, including biographies and fiction, returning to non-fiction in 2010 with One of Your Own: The Life and Death of Myra Hindley, A Fine Day for a Hanging (2012) and The Murders at White House Farm (2015).

GOR009691896
Somebody's Mother, Somebody's Daughter: True Stories from Victims and Survivors of the Yorkshire Ripper by Carol Ann Lee
Carol Ann Lee
Used - Very Good
Hardback
Michael O'Mara Books Ltd
2019-03-21
336
1789290392
9781789290394
N/A
Book picture is for illustrative purposes only, actual binding, cover or edition may vary.
This is a used book - there is no escaping the fact it has been read by someone else and it will show signs of wear and previous use. Overall we expect it to be in very good condition, but if you are not entirely satisfied please get in touch with us.