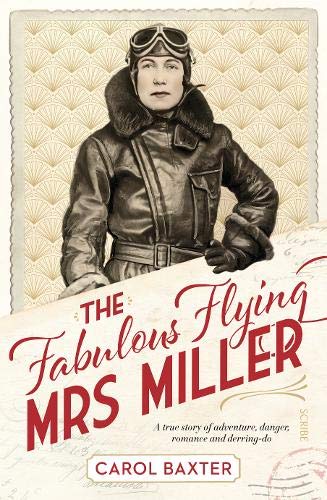 The remarkable true story of a beguiling Melbourne housewife who in the 1920s seeks international fame, fortune, and adventure as an aviator and finds herself as the central figure in a sensational American murder trial.

'Mrs Keith Miller, internationally known aviatrix, was taken to the county jail here today and held for investigation by State Attorney's investigators. Jail attendants said they understood she was held in connection with the shooting of an airline pilot.'

Petite, glamorous, and beguiling, Jessie 'Chubbie' Miller was one remarkable woman ... flyer, thrill seeker, heartbreaker. No adventure was too wild for her, no danger too extreme. And all over the world men adored her.

When the young Jessie left suburban Melbourne and her newspaperman husband in 1927, little did she know that she'd become the first woman to complete an England to Australia flight (with a black silk gown thrown into her small flight bag, just in case), or fly the first air race for women with Amelia Earhart, or that she would disappear over the Florida Straits feared lost forever only to charm her way to a rescue. Nor could she have predicted that five years later she'd find herself at the centre of one of the most notorious and controversial murder trials in United States history. And this all began with something as ridiculously mundane as a pat of butter.

The Fabulous Flying Mrs Miller is a spellbinding story of an extraordinary woman - an international celebrity during the golden age of aviation - and her passionate and spirited life.

'Carol Baxter's highly readable biography provides an engaging portrait of a young suburban housewife who decided, quite literally, to make her own way in the world. As Baxter acknowledges, for a biographer it is a tremendous story that just keeps on giving. This book does it justice.'

'This thrilling biography ... Readers will enjoy coming along for the ride.'

* Publishers Weekly *
Carol Baxter is the author of many highly acclaimed books about fascinating people including An Irresistible Temptation, Captain Thunderbolt and His Lady, Black Widow and The Peculiar Case of the Electric Constable, published in the United Kingdom and around the world. She lives in Sydney and is a fellow of the Society of Genealogists.
NGR9781911617921
9781911617921
1911617923
The Fabulous Flying Mrs Miller: a true story of adventure, danger, romance and derring-do by Carol Baxter
Carol Baxter
New
Paperback
Scribe Publications
2019-05-09
376
Long-listed for The Davvitt Award 2018 (Australia)
Book picture is for illustrative purposes only, actual binding, cover or edition may vary.
This is a new book - be the first to read this copy. With untouched pages and a perfect binding, your brand new copy is ready to be opened for the first time
Trustpilot