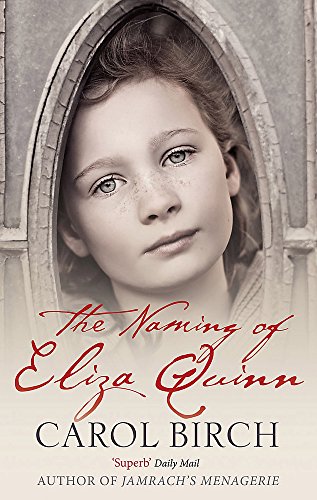 The Naming Of Eliza Quinn
by Carol Birch

The Naming Of Eliza Quinn Summary

The Naming Of Eliza Quinn by Carol Birch

This is an extraordinarily haunting novel, inspired by a true story. In the late 1960s, in the hollow of an ancient oak tree beyond a derelict cottage in Cork, were found the bones of a three-year-old girl. It was thought that they dated back to the time of the great potato famine of the mid 1800s. The bones were discovered by an American woman, who had inherited the cottage which had lain empty and broken for forty years. Local searches reveal that the house had originally belonged to The Quinns. Eliza Quinn was their baby.

This is a story that speaks of generations and of landscapes: abandoned villages, famine graves, old potato ridges sinking back into the earth, traces of a population that fell by two and a half million in less than ten years. It is also about hunger, both physical and emotional. But above all, it is the story of the Quinn family. And it is Carol Birch's tour de force.

The Naming Of Eliza Quinn Reviews

Always understated, yet crammed with incidents of the highest drama, the novel's best moments come when the intense feeling that underlies it breaks out into densely weighted fragments of speech. It is at least as good as anything on this year's Booker shortlist, and I remain as mystified as ever by Carol Birch's absence from that far-from cluttered file of modern novelist whose works are genuinely worth their welcome * DJ Taylor, GUARDIAN *
Carol Birch's fiction continues to stretch bodies and minds to breaking point...marvellous and terrifying * Sunday TIMES *

Carol Birch was born in Manchester. Author of seven novels, she has won the David Higham Award, the Geoffrey Faber Memorial Prize and was longlisted for the 2003 ManBooker Prize. She lives in Lancaster.

GOR001297485
The Naming Of Eliza Quinn by Carol Birch
Carol Birch
Used - Very Good
Paperback
Little, Brown Book Group
2006-08-03
352
184408146X
9781844081462
N/A
Book picture is for illustrative purposes only, actual binding, cover or edition may vary.
This is a used book - there is no escaping the fact it has been read by someone else and it will show signs of wear and previous use. Overall we expect it to be in very good condition, but if you are not entirely satisfied please get in touch with us.