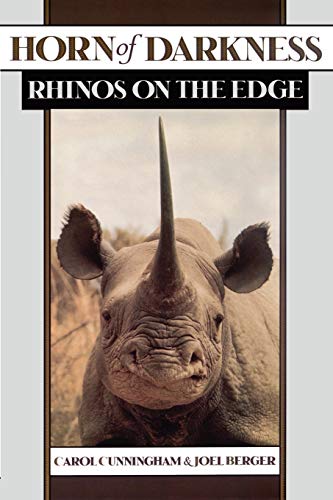 In Stock
$16.49
+10% GST
The story of a three year study in the Namib desert of Africa's last sizeable population of free-roaming black rhinos and assessing the hope for their survival. A mix of western science and local interests, political and economic influences, and personal commitment.
Very Good Good
Only 1 left

Horn of Darkness: Rhinos on the Edge by Carol Cunningham (Biotechnician, Department of Environmental and Resource Studies, University of Nevada, Reno)

The world's rhinoceroses face extinction because a part of their anatomy is valued too much. Poachers hunt and slaughter them because their horns are treasured. Once an estimated 100,000 black rhinos roamed from the Sahara to the Cape of Good Hope but onw less than 3% remain. In all of Africa, there is but a single unfenced population numbering more than 100 individuals, in the inhospitable barrens of the Namib Desert. In 1989 a radical strategy was developed - cutting the horns. The rationale is simple. If a rhino has no horns, the incentive to kill it should disappear. What has since unfolded is a biological and political drama. Carol Cunningham and Joel Berger describe their quest to help conserve Africa's black rhinos in a book that is both an adventure story and virtual guidebook to the challenges and experience of field biology. The authors present such a multifaceted and rich account of the complicated mix of scientific, political, economic, social, and moral concerns affecting any effort to preserve an endangered species. It moves beyond the typical nature study by bringing in real world components of conservation - the delicate mix of western science, politics and economics, and personal despair and hope.

"In Namibia a radical solution [to stop the wholesale slaughter of rhinos] has been tried--removing the rhino's horns to remove the poacher's desire to kill. The two authors ... and their young daughter ... spent 3 seasons in Namibia ... dehorning rhino and researching the wildlife biology of this species. The book is a narrative of their time in Namibia. It reads like a novel, starting with their first tentative steps in the country and following their scientific and social interaction with the people of the country. Through their writing you can feel the heat and sweat, the exhilaration of the work and their reaction to feeling like unwanted invaders of privacy when meeting with remote tribes people. When their fourth session of work is stopped before it really starts because of politics, the reader gets and object lesson about the politics of conservation. This book is every bit as good as 'Out of Africa' but with a lot more good ecology in it."--Bulletin of the British Ecology Society
Reviews from the cloth edition "Horn of Darkness, a fast-moving adventure about field studies in the Namib desert, is also an object lesson about the politics of conservation. When the Namibian government began to de-horn black rhinos in the early 1990s as a deterrent to poachers, Berger and Cunningham were welcomed as guest scientists to examine the biological consequences. Their gypsy-like quest for data contains humor, understanding, and the insight that the human dimension, rather than biology, poses the greatest challenges to wildlife conservation." --Chris Wemmer, Smithsonian Institution
"Horn of Darkness accomplishes an important purpose. Though happily devoid of preachments or rhapsodic sighs about the wonders of nature, it conveys the importance of conservation, even as it dispels any illusions that the task is easy. One reads Horn of Darkness and wishes its authors and their brethren success for the sake of all of us, rhinoceroses included."--The New York Times
"These remarkable authors, Carol Cunningham and Joel Berger, show that the process of Science is subject to the distortions of political agendas, of whimsical authority. Yet their trials are described with sensitivity, emotion, humor and a deeply felt commitment to the future of humankind and their fellow species and environments." --A. R. E. Sinclair, Professor of Ecology and Director, Centre for Biodiversity Research
"A compelling tale of how scientists work under physically and politically challenging conditions in an attempt to determine if radical management can help conserve one of the world's most critically endangered mammals in one of the world's wildest places. The reader is treated to a blend of science with a unique personal perspective into the family life of field biologists."--Steven R. Beissinger, Division of Ecosystem Sciences, Department of Environmental Science, Policy and Management, University of California, Berkeley
"More than a nature study or adventure story, Horn of Darkness is a melange of politics, economics, hope, despair, and intestinal fortitude. It's a great read, because it's real."--Dr. Andy Phillips, Deputy Director, Center for Reproduction of Endangered Species, Zoological Society of San Diego
"Few would have had the courage to take their families into the harsh and lonely landscape of the Namib; even fewer would have returned with so much for science, humanity and the wildlife they studied.... This book is a must read for anyone seeking insight into the lives of those who struggle to conserve endangered species and those who want to know more about the desperate plight of the black rhinoceros."--Mark Dykes, Administrative Director, Owens Foundation for Wildlife Conservation
"In alternating chapters, the two authors plait their days afield into a delightful memoir: how they learned to track, to dodge rhino charges, to overcome all the logistical problems of cameras and auto mechanics and night-vision and life without a tossed salad."--Kirkus Reviews
"It is, finally, the variety of subjects touched on that makes these researchers' lives vividly real to young adults."--School Library Journal

Carol Cunningham and Joel Berger have worked as a team for fifteen years studying conservation and wildlife issues from Africa and Alaska to the Great Basin Desert. They both work at the University of Nevada, in Reno, and live up in the Sierras.