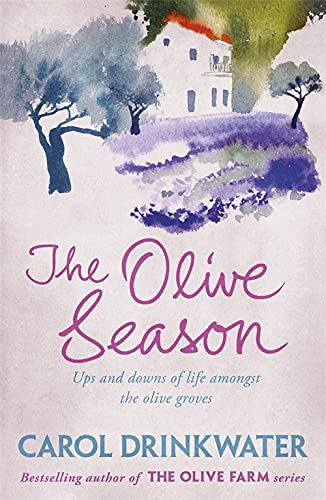 The Olive Season
by Carol Drinkwater

Used Price
$24.49
inc. GST
Free Shipping in Australia
Second in the Olive story from the bestselling author of THE OLIVE FARM and THE OLIVE HARVEST - now in a gorgeous new look from the author of THE FORGOTTEN SUMMER.
Like New Very Good Good

The Olive Season: By The Author of the Bestselling The Olive Farm by Carol Drinkwater

"I scan the terraces, planted with row upon row of ancient olive trees. It is April, late spring. Here in the hills behind the Cote d'Azur the olive groves are delicately blossomed, with their tiny, white-forked flowers. Beyond them, perched halfway up the slope of the hill, our belle epoque villa comes into view. Abounding in balustrade terraces, nestling among cedars and palms, facing out at a south-westerly angle, overlooking the bay of Cannes towards the sun-kissed Mediterranean, there it is, Appassionata, awaiting us..."

THE OLIVE FARM told how Carol Drinkwater and partner Michel fell in love with and bought an abandoned Provencal olive farm. Now, in THE OLIVE SEASON, Carol is pregnant and their ever-loyal gardener is leaving to oversee the marriage of his son. Often unassisted, and with new challenges to face, Carol takes on the bulk of the farm work alone. Water is, as ever, a costly problem, and she goes in search of a diviner who promises almost magical results. But, as the harvest season approaches, dramatic events cast dark shadows of their olive farm.

"Sensual, romantic, and personal ... a new take on travel writing."
"Drinkwater is a perpetual student, and her delightful curiosity is infectious. [The Olive Season] is filled with charming passages about her various passions."

Best known for her role as Helen Herriot in BBC Television's ALL CREATURES GREAT AND SMALL (for which she was awarded THE VARIETY CLUB TELEVISION PERSONALITY OF THE YEAR AWARD), Carol Drinkwater has enjoyed a long and distinguished career as both an actress and writer. During her acting career she has worked in film, television and theatre. Her credits include working with Laurence Olivier at the National Theatre and Stanley Kubrick on A CLOCKWORK ORANGE.

Carol is the author of six bestselling memoirs: THE OLIVE FARM, THE OLIVE SEASON, THE OLIVE HARVEST, THE OLIVE ROUTE, THE OLIVE TREE and RETURN TO THE OLICE FARM. Carol worked with UNESCO on a lavish documentary film series inspired by her two most recent books, THE OLIVE ROUTE and THE OLIVE TREE. The series is both travel and history based and will follow an Olive Heritage Trail around the Mediterranean Basin. The aim is to celebrate the cultural heritage of this sacred tree. The first transmissions will be in Canada in February and in Germany in April 2013.

GOR008705524
The Olive Season: By The Author of the Bestselling The Olive Farm by Carol Drinkwater
Carol Drinkwater
Used - Like New
Paperback
Orion Publishing Co
2011-05-12
352
0753829355
9780753829356
N/A
Book picture is for illustrative purposes only, actual binding, cover or edition may vary.
The book has been read, but looks new. The book cover has no visible wear, and the dust jacket is included if applicable. No missing or damaged pages, no tears, possible very minimal creasing, no underlining or highlighting of text, and no writing in the margins.