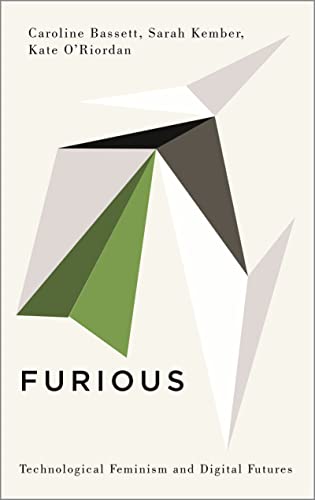 As digital transformations continue to accelerate in the world, discourses of big data have come to dominate in a number of fields, from politics and economics, to media and education. But how can we really understand the digital world when so much of the writing through which we grapple with it remains deeply problematic?

In a compelling new work of feminist critical theory, Bassett, Kember and O'Riordan scrutinise many of the assumptions of a masculinist digital world, highlighting the tendency of digital humanities scholarship to venerate and essentialise technical forms, and to adopt gendered writing and citation practices. Contesting these writings, practices and politics, the authors foreground feminist traditions and contributions to the field, offering alternative modes of knowledge production, and a radically different, poetic writing style.

Through this prism, Furious brings into focus themes including the automation of home and domestic work, the Anthropocene, and intersectional feminist technofutures.

'Furious rips beyond the vanity of know-it-all analysis to offer long-awaited new ways of thinking, feeling, and writing. Cunningly crafted by an authorial trio, it bewitches with performative feminist energies. I dare you to read it' -- Sally-Jane Norman, Founding Director of the Attenborough Centre for the Creative Arts at the University of Sussex
'A rare gem of a book, Furious makes a sharp, critical feminist intervention in digital media research demonstrating the power of thinking together, going against the conventions of academic writing, and creating good trouble' -- Susanna Paasonen, co-author of 'NSFW: Sex, Humor, and Risk in Social Media'
'This wide-ranging and imaginative book makes a compelling case for a feminist techno-politics which challenges to the core the masculinist grip of computational culture and science. It's also a book which pays fine attention to the process of writing' -- Angela McRobbie, author of 'Be Creative: Making a Living in the New Culture Industries'
'A passionate guidebook to feminist theorising that refuses data as self-evident patterns and theory as beautiful abstractions, while insisting on the generative power of writing, fabulation, and future making' -- Lucy Suchman, author of 'Feminist STS and the Sciences of the Artificial'
'Combining clarity with rational ire, Furious insists on the power of insurgent, intersectional feminist epistemologies to disrupt, inspire, and transform. This collective feminist tour de force writes us a new course, away from the technophilic belief that technology will fix what ails the contemporary world and toward a critical and temperate utopianism' -- Carol Stabile, author of 'The Broadcast 41: Women and the Anti-Communist Blacklist'

Caroline Bassett is Professor of Media and Communications at the School of Media Film and Music, University of Sussex, and Director of the Sussex Humanities Lab. She is the author of The Arc and the Machine (2007). Sarah Kember is Professor of New Technologies of Communication at Goldsmiths, University of London, and Director of Goldsmiths Press. She is the author of Cyberfeminism and Artificial Life (2003) and iMedia: The Gendering of Objects, Environments and Smart Materials (2016). Kate O'Riordan is Reader in Digital Media at the University of Sussex. Her research interests relate to cultural studies of emerging technologies, from the web in the 1990s to genome editing in 2014. She has authored and edited a number of books including Unreal Objects (Pluto, 2017) and The Genome Incorporated: Constructing Biodigital Identity (Routledge, 2016).

Series Preface Preface 1. Feminist Futures: A Conditional Paeon for the Anything-Digital 2. Scale, Subject and Stories: Unreal Objects 3. Bland Ambition? Automation's Missing Visions 4. Driving at the Anthropocene, or, Let's Get Out of Here: How? 5. Technological Feminism and Digital Futures Bibliography

GOR010214992
Furious: Technological Feminism and Digital Futures by Caroline Bassett
Caroline Bassett
Digital Barricades
Used - Very Good
Paperback
Pluto Press
2019-11-20
144
0745340504
9780745340500
N/A
Book picture is for illustrative purposes only, actual binding, cover or edition may vary.
This is a used book - there is no escaping the fact it has been read by someone else and it will show signs of wear and previous use. Overall we expect it to be in very good condition, but if you are not entirely satisfied please get in touch with us.