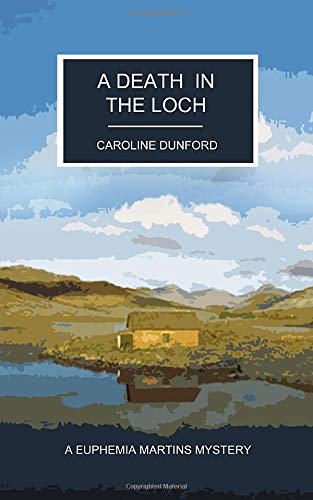 A Death in the Loch
by Caroline Dunford

A Death in the Loch Summary

A Death in the Loch: A Euphemia Martins Mystery by Caroline Dunford

During a Christmas party, Euphemia Martins - together with Bertram Stapleford and manservant Rory McLeod - is tasked by the slippery government agent Fitzroy with doing a little snooping at the Staplefords' Highland Lodge.

When Euphemia discovers the purposes of the charade for which she has been demoted back to a maid, she is furious. There are plans afoot - plans which involve signing the Official Secrets Act ...

Meanwhile, Rory still isn't speaking to her and Bertram is more interested in growing his awful new beard. The arrival at the Lodge of four mysterious 'Mr Smiths' - and some outrageous proposals for Scotland's future - raises tensions to boiling point, and that's not even mentioning the German spy lurking in the woods, or the accident with some hot soup ...

But when the inevitable dead body turns up, they must all work together or find themselves jailed for murder.

Caroline Dunford has previously worked as a psychotherapist, a journalist and a non-fiction author. She has a deep love of story, which she believes is at the heart of human nature. She first declared, at five years old, that she wanted to be a writer but was told there was little options of it being a full time job. Undeterred, she started writing short stories, plays and mini novels. She became known for writing plays at primary school including casting and directing the performances. She then grew up and went to university, studied sensible subjects and decided she didn't like the 'real world' one bit. She started out as a freelance journalist and writer, sending off short stories to every magazine she could find and received rejection after rejection until she learnt to better her writing. As a journalist, she was somewhat of a failure as she didn't like upsetting people and therefore never made it to tabloid press. She then studied a part time degree in psychology, which she enjoyed more than her past studied subjects. Caroline then spent years working with other people helping them shape their personal life stories (she is a Freudian at heart) until she decided to take the plunge and write her own stories full time. She believes that writing fiction is now the only way she can stay sane. Euphemia Martins was partly inspired by the family legend of her great, great grandmother, who ran away from a very rich family and ended up working in service. Unlike Euphemia, she found the life far too hard, but was rescued by a tobacconist, whom she married and with whom she had thirteen children. Murder casts a sharp light over those around it, revealing characters and morality in unique sharpness. What forces one to take the life of another and how those around react reveals so much about human nature and the fragility of society. Caroline finds the period before WW1, when everyone was setting their playing pieces on the board for global conflict fascinating. She is also intrigued by the start of female emancipation and the class-system breakdown that was taking hold. Caroline loves puzzles and finds human beings the most exciting puzzles of all. But above all, she believes life must be enjoyed with humour. We must all bring whatever light we can to the darkness.

GOR009222091
A Death in the Loch: A Euphemia Martins Mystery by Caroline Dunford
Caroline Dunford
A Euphemia Martins Mysteries
Used - Very Good
Paperback
Accent Press Ltd
2014-10-09
168
178375527X
9781783755271
N/A
Book picture is for illustrative purposes only, actual binding, cover or edition may vary.
This is a used book - there is no escaping the fact it has been read by someone else and it will show signs of wear and previous use. Overall we expect it to be in very good condition, but if you are not entirely satisfied please get in touch with us.