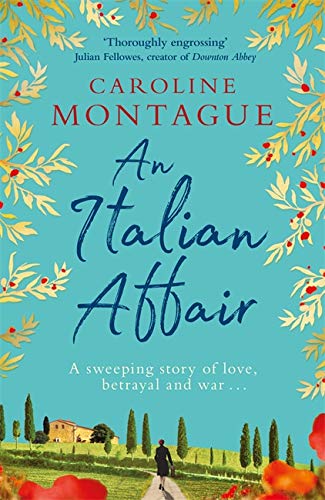 An Italian Affair
by Caroline Montague

An Italian Affair by Caroline Montague

Italy, 1937. Alessandra Durante is grieving the loss of her husband when she discovers she has inherited her ancestral family seat, Villa Durante, deep in the Tuscan Hills. Longing for a new start, she moves from her home in London to Italy with her daughter Diana and sets about rebuilding her life.

Under the threat of war, Alessandra's house becomes first a home and then a shelter to all those who need it. Then Davide, a young man who is hiding the truth about who he is, arrives, and Diana starts to find her heart going where her head knows it must not.

Back home in Britain as war breaks out, Alessandra's son Robert, signs up to be a pilot, determined to play his part in freeing Italy from the grip of Fascism. His bravery marks him out as an asset to the Allies, and soon he is being sent deep undercover and further into danger than ever before.

As war rages, the Durante family will love and lose, but will they survive the war...?

'Enthralling...An Italian Affair snares us in an ever-tightening circle of love and despair, secrets and forgiveness' - Joanna Lumley

Caroline won her first National Poetry competition at 10 years old and from that moment dreamed of being a writer. After juggling motherhood with modelling assignments, she founded an Interior Design Company working on many projects in the UK and abroad. Her second marriage to the widowed Conroy Harrowby brought four stepchildren into her life, giving her a wider audience for her imaginative bedtime stories. As a family they all live at the Harrowby ancestral home, Burnt Norton, which famously inspired T S Eliot to write the first of his "Four Quartets". At last Caroline has the time to fulfil her dream of becoming a full time author.

GOR009702282
An Italian Affair by Caroline Montague
Caroline Montague
Used - Very Good
Paperback
Unknown
0
1409180786
9781409180784
N/A
Book picture is for illustrative purposes only, actual binding, cover or edition may vary.
This is a used book - there is no escaping the fact it has been read by someone else and it will show signs of wear and previous use. Overall we expect it to be in very good condition, but if you are not entirely satisfied please get in touch with us.