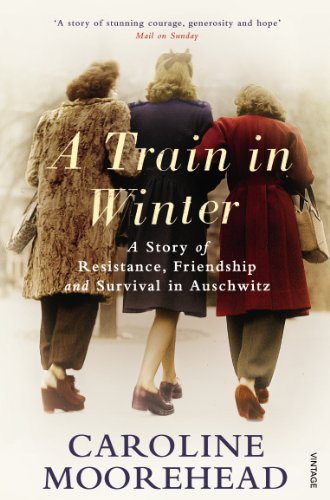 A Train in Winter
by Caroline Moorehead

Out of Stock
$16.49
inc. GST
A moving and extraordinary book about courage and survival, friendship and endurance - a portrait of ordinary women who faced the horror of the holocaust together.
Very Good
Only 0 left

A Train in Winter Summary

A Train in Winter: A Story of Resistance, Friendship and Survival in Auschwitz by Caroline Moorehead

A moving and extraordinary book about courage and survival, friendship and endurance - a portrait of ordinary women who faced the horror of the holocaust together. On an icy morning in Paris in January 1943, a group of 230 French women resisters were rounded up from the Gestapo detention camps and sent on a train to Auschwitz - the only train, in the four years of German occupation, to take women of the resistance to a death camp. Of the group, only 49 survivors would return to France. Here is the story of these women - told for the first time. A Train in Winter is a portrait of ordinary people, of their bravery and endurance, and of the friendships that kept so many of them alive. `A story of stunning courage, generosity and hope' Mail on Sunday `Serious and heartfelt...profound' Sunday Times

A Train in Winter Reviews

"This serious and heartfelt book does deliver on its promise of a tale of how female friendship "can make the difference between living and dying"... Profound" -- Brian Schofield * Sunday Times *
"A harrowing but also uplifting shared story of friendship, courage and endurance" * Independent *
"A story of stunning courage, generosity and hope. They risked their lives to defeat Fascism, by printing subversive literature, hiding Jewish friends or, in the case of one girl, simply insulting a French youth because he had decided to co-operate with the Nazis. The price they paid for their bravery was terrible. A Train in Winter could have been a sad, almost morbid book. In Moorehead's expert hands it is a triumphant one" -- Kathryn Hughes * Mail on Sunday *
"Compassionate, meticulous and compulsively enthralling... This book is essential reading. The litany of names at the end, with their brief biographies (Yolande, Cecile, Poupette, Mitzy, Lucie...) reminds us weeping is not enough. It bears witness - and warns" -- Bel Mooney * Daily Mail *
"Moorehead tells her appalling story in measured prose that sets off perfectly the reader's growing sense of wonder that such heroism is possible" * Guardian *

Caroline Moorehead is the biographer of Bertrand Russell, Freya Stark, Iris Origo and Martha Gellhorn. Well known for her work in human rights, she has published a history of the Red Cross and a book about refugees, Human Cargo. Her most recent book, Dancing to the Precipice, a biography of Lucie de la Tour du Pin, was shorlisted for the Costa Biography Award in 2009. Caroline lives in London.

GOR004243675
A Train in Winter: A Story of Resistance, Friendship and Survival in Auschwitz by Caroline Moorehead
Caroline Moorehead
Used - Very Good
Paperback
Vintage Publishing
2012-09-06
384
0099523892
9780099523895
N/A
Book picture is for illustrative purposes only, actual binding, cover or edition may vary.
This is a used book - there is no escaping the fact it has been read by someone else and it will show signs of wear and previous use. Overall we expect it to be in very good condition, but if you are not entirely satisfied please get in touch with us.