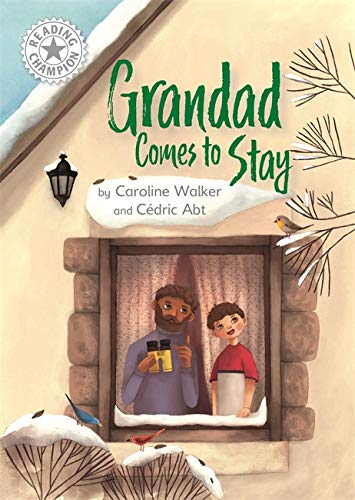 This story is part of Reading Champion, a series carefully linked to book bands to encourage independent reading skills, developed with Dr Sue Bodman and Glen Franklin of UCL Institute of Education (IOE)

Oliver loves to RUN and he never sits still or moves slowly ... until an injury forces him to take it easy. Lucky for Oliver, Grandad comes round to help, and he is full of great ideas to have fun during Oliver's slow winter! This book is aimed at Independent Reading Book Band White 10, for readers aged from 5-7 years.

This story is part of Reading Champion, a series carefully linked to book bands to encourage independent reading skills, developed with Dr Sue Bodman and Glen Franklin of UCL Institute of Education (IOE).

Fantastic, original stories are accompanied by engaging artwork and a reading activity. Each book has been carefully graded so that it can be matched to a child's reading ability, encouraging reading for pleasure.

Caroline comes from a writing family and she is following in the footsteps of her mum and two sisters in writing for children. She has worked with children for several years in schools and churches, and loves telling stories and teaching about all sorts of fascinating things! She is married to Matt and also enjoys reading stories and history books, spotting wildlife and looking after her cheeky cat, Willow. Cedric was born in France, in 1988. Since early childhood, the art of drawing has been a source of inspiration for him. He chose to study graphic art at the ESA, Grande Ecole of Arts, in Tournai, Belgium. Soon, the art of illustration became particularly appealing and the idea of telling stories through drawings filled him with enthusiasm. After graduation, he became a freelance illustrator and started working for youth programs in Lille, in the north of France, for two years before moving to the Paris region. His work, first exclusively traditional, became more and more a mix of traditional and digital techniques: acrylic paint, pencil drawing, watercolors, collage, Photoshop, etc. For Cedric, the process is a sort of laboratory where experimentation and accidents give life to his drawings and create dream-like and colorful universes. During his work sessions, he likes to listen to music from Max Richter and Olafur Arnalds, to name just a few. His creative journey is based on more or less sensitive themes that generate inspiration: human nature, environmental nature, childhood or loneliness. Open minded, he doesn't set himself any barriers and nourishes his imagination via very different projects: children's books, CD jackets, novel covers, illustrations for concert cinemas, animation. Today, he lives in Brittany, closest to nature and the sea.
NGR9781445172279
9781445172279
1445172275
Reading Champion: Grandad Comes to Stay: Independent Reading White 10 by Caroline Walker
Caroline Walker
Reading Champion
New
Paperback
Hachette Children's Group
2020-09-08
24
N/A
Book picture is for illustrative purposes only, actual binding, cover or edition may vary.
This is a new book - be the first to read this copy. With untouched pages and a perfect binding, your brand new copy is ready to be opened for the first time
Trustpilot