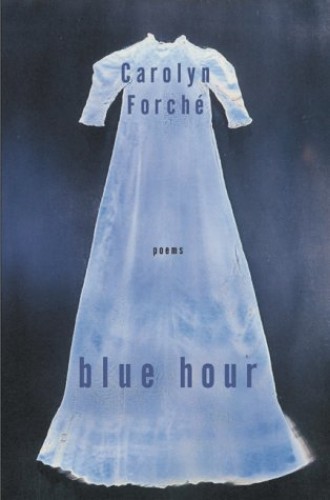 Carolyn Forche is one of America's most important contemporary poets. Blue Hour is a visionary book, and includes On Earth, a extraordinary long poem, a meditation on human existence and life on earth. Jane Miller called Blue Hour 'a masterwork for the 21st century'. John Bayley said that reading these poems is 'an experience as calmly and restfully beautiful as looking at a group of related impressionist canvasses, like those of Monet'.
Blue Hour is an elusive book, because it is ever in pursuit of what the German poet Novalis called the lost presence beyond appearance. The longest poem, On Earth, is a transcription of mind passing from life into death, in the form of an abecedary, modelled on ancient gnostic hymns. Other poems in the book are lyric recoveries of the act of remembering, though the objects of memory seem to us vivid and irretrievable, the rage to summon and cling at once fierce and distracted. The voice we hear in Blue Hour is a voice both very young and very old. It belongs to someone who has seen everything and who strives imperfectly, desperately, to be equal to what she has seen. The hunger to know is matched here by a desire to be new, totally without cynicism, open to the shocks of experience as if perpetually for the first time, though unillusioned, wise beyond any possible taint of a false or assumed innocence. -- Robert Boyers
The poignant cri de coeur of this singular work must affect all who have an integrity still possible in this painfully despairing time. Carolyn Forche makes a complex voice for all the mute victims of our destructive world as the killing goes on and the patterns of our lives continue our committed self-destruction. Hers is the heroism which still cares. -- Robert Creeley
Part of poetry's tragic knowledge is that elegy is endless. Yet in its power to recall and to memorialise, elegy also effaces time and reinvests loss, the lost, with life. It is a form of overcoming, essential to our knowing of, and dwelling in, the present and to our becoming human. As Blue Hour demonstrates with such startling range of invention, Carolyn Forche is one of the contemporary masters of that form, that act. -- Michael Palmer
Carolyn Forche was born in Detroit, Michigan in 1950, and has taught at several universities. She was Director of Lannan Center for Poetics and Social Practice, and held the Lannan Visiting Chair in Poetry at Georgetown University, Washington, DC, where she is now a University Professor. Her many honours include fellowships from the Guggenheim Foundation, the Lannan Foundation and the National Endowment for the Arts; the Edita and Ira Morris Hiroshima Foundation Award, given in 1997 for using her poetry as a 'means to attain understanding, reconciliation, and peace within communities and between communities'; and most recently, Yale University's Windham-Campbell Prize. Her first collection, Gathering the Tribes (1976), was selected for the Yale Series of Younger Poets by Stanley Kunitz. Her second book, The Country Between Us (1981; UK reissue from Bloodaxe, 2019), drew on her experiences in El Salvador before and during the civil war, and won the Poetry Society of America's Alice Fay di Castagnola Award, and was the Lamont Poetry Selection of the Academy of American Poets. Her later collections have drawn upon work written over many years: The Angel of History (HarperCollins, USA; Bloodaxe Books, 1994), Blue Hour (HarperCollins, USA; Bloodaxe Books, 2003), and In the Lateness of the World (Bloodaxe Books, UK' Penguin Press, USA, 2020). Her landmark anthology, Against Forgetting: Twentieth-Century Poetry of Witness (Norton, 1993), was followed by Poetry of Witness: The Tradition in English: 1500-2001 (Norton, 2014), edited with Duncan Wu. She is Visiting Professor at Newcastle University, and edited the anthology The Mighty Stream: Poems in celebration of Martin Luther King (Bloodaxe Books / Newcastle University, 2017) with Jackie Kay. Her memoir What You Have Heard Is True: a memoir of witness and resistance (2019) was published by Penguin at the same time as Bloodaxe's UK reissue of her 1981 collection The Country Between Us, which covers the same period as the memoir. Her translations include Mahmoud Darwish's Unfortunately, It Was Paradise: Selected Poems (with Munir Akash, 2003), Claribel Alegria's Flowers from the Volcano (1983), and Robert Desnos's Selected Poetry (with William Kulik, 1991).
GOR010166137
9781852246181
1852246189
Blue Hour by Carolyn Forche
Carolyn Forche
Used - Good
Paperback
Bloodaxe Books Ltd
2003-04-24
80
N/A
Book picture is for illustrative purposes only, actual binding, cover or edition may vary.
This is a used book - there is no escaping the fact it has been read by someone else and it will show signs of wear and previous use. Overall we expect it to be in very good condition, but if you are not entirely satisfied please get in touch with us
Trustpilot