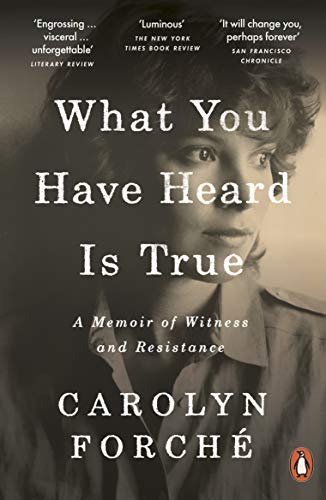 What You Have Heard Is True by Carolyn Forche

What You Have Heard Is True: A Memoir of Witness and Resistance by Carolyn Forche

'Astonishing, powerful, so important at this time' - Margaret Atwood (on Twitter)
'Riveting . . . intricate and surprising' - The New York Times
'Reading it will change you, perhaps forever' - San Francisco Chronicle

An electrifying memoir set in the Salvadoran Civil War:
the true story of a young poet who becomes an activist through a trial by fire

Carolyn Forche, an American poet, is 27 when a mysterious stranger called Leonel appears on her doorstep, having driven direct from El Salvador. Her friend has heard rumours about who he might be - a communist, a CIA operative, a sharpshooter, a motorcycle racer, a revolutionary, a small coffee farmer - but nobody seems to know for certain. Captivated for reasons she doesn't fully understand, she accepts his invitation to visit and learn about his country, and so becomes enmeshed in the early stages of a brutal civil conflict which will ultimately see the Salvadoran state turn paramilitary death squads against its own people, and leave nearly 90,000 dead or disappeared. Leonel knows that war is coming, and he wants Carolyn - as a writer - to bear witness to it.

Told across peasant shanties, protest marches, the grand homes of retired generals and safe houses on the run, What You Have Heard Is True is the devastating true story of a young woman's choice to engage with horror in order to help others, of an unlikely friendship which will change the
course of her life, and of a remarkable man's doomed effort to save his people from disaster.

Once Forche's story gathers momentum, it's hard to let the narrative go . . . Riveting . . . intricate and surprising * The New York Times *
Indispensable . . . unflinching . . . Forche offers up a vast human landscape of terror, desperation and perseverance that stretches far beyond mere borders. It's more documentary than self-portrait, more camera than mirror. Reading it will change you, perhaps forever * San Francisco Chronicle *
Gripping . . . 'I could just as well write my poetry from the quiet of my own study,' Forche writes, 'but I had known since childhood that human suffering demanded a response, everywhere and always.' A portrait of the artist as political and poetic ingenue, What You Have Heard Is True is just such a response, a riveting account of how she made good on that conviction. It bears eloquent witness to injustice and atrocity and to how observing them shaped a fearless poet * The Washington Post *
Extraordinary . . . Written with a thriller writer's knack for narrative tension and a poet's gorgeous sentences and empathy . . . Though it took Forche half a lifetime to fully share what she saw - this time is also more cryptically recalled in her second book of poems, The Country Between Us (1982) - now is precisely when we need to see it * NPR *
Her memoir traces her journey from political innocence to experience, and, in doing so, offers a model to others who might take the same journey . . . She remembers as much as possible, and the resulting memoir, once read, is difficult to forget * The Atlantic *
Forche looks with a poet's acute grasp of sensory detail ... She meets priests, poets, campesinos, retired generals ... She runs from death squads, acknowledges American complicity in Salvadoran military's tactics, searches for the bodies of friends dumped on the black sand beaches. One can imagine this memoir being made into a film in the mould of The Killing Fields ... Written with great care, this clear-eyed memoir and its evocative black-and-white photos bear powerful witness to the atrocities committed by a government to repress its own impoverished citizens * Daily Telegraph *
Forche ... writes with a startling, visceral clarity about grotesque events ... With her poems, and now with this exceptionally well-written and engrossing memoir, [Forche] has borne witness, remembered, tried to see. She has spent many years of her life telling the stories of El Salvador ... What You Have Heard Is True paints a stark, tangible and unforgettable picture of a nation descending into civil war and raises fascinating questions about the role of the observer ... Her writing has a way of scratching images into the memory * Daily Telegraph *
Carolyn Forche is an American poet, editor, translator and human rights activist. Her honours include a Guggenheim Fellowship, an Academy of American Poets Fellowship for distinguished poetic achievement and three fellowships from the National Endowment for the Arts. In 2017, she became one of the first two poets ever to receive the Windham-Campbell Prize. Forche is a University Professor at Georgetown University.
NGR9780241405581
9780241405581
0241405580
What You Have Heard Is True: A Memoir of Witness and Resistance by Carolyn Forche
Carolyn Forche
New
Paperback
Penguin Books Ltd
2020-03-26
400
N/A
Book picture is for illustrative purposes only, actual binding, cover or edition may vary.
This is a new book - be the first to read this copy. With untouched pages and a perfect binding, your brand new copy is ready to be opened for the first time
Trustpilot