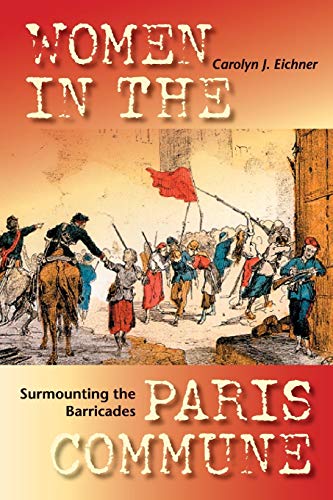 Surmounting the Barricades: Women in the Paris Commune by Carolyn J. Eichner

This book vividly evokes radical women's integral roles within France's revolutionary civil war known as the Paris Commune. It demonstrates the breadth, depth, and impact of communard feminist socialisms far beyond the 1871 insurrection. Examining the period from the early 1860s through that century's end, Carolyn J. Eichner investigates how radical women developed critiques of gender, class, and religious hierarchies in the immediate pre-Commune era, how these ideologies emerged as a plurality of feminist socialisms within the revolution, and how these varied politics subsequently affected fin-de-siecle gender and class relations. She focuses on three distinctly dissimilar revolutionary women leaders who exemplify multiple competing and complementary feminist socialisms: Andre Leo, Elisabeth Dmitrieff, and Paule Mink. Leo theorized and educated through journalism and fiction, Dmitrieff organized institutional power for working-class women, and Mink agitated crowds to create an egalitarian socialist world. Each woman forged her own path to gender equality and social justice.

Conceived as a contribution to the history of French feminism, Carolyn Eichner's study implicitly links the feminists of the 1848 Revolution with those of the late nineteenth century by demonstrating the Paris Commune's central importance as a catalyst for one important strand of feminist activism.... Eichner argues convincingly that these women have been little recognized by historians of the Commune, in part because of their predominant focus on the overpowering figure of Louise Michel and on the 'incendiaries' who came to personify the insurrection itself.... In her view, they must be recognized first and foremost as feminists, revealing elements of continuity within feminism and a legacy for future struggles over women's suffrage at the century's end.... [Her three principal protagonists] were caught up in internal socialist debatesover goals and strategies, as they attempted to define their own forms of 'feminist socialism' that could generate a 'gendered critique of class analysis.'... In the civil war that was the Commune all three women chose to subordinate gender questions to the overriding issue of class struggle... [The] historiography of feminism and socialism has tended tomarginalize the Communardes on the grounds that these militants demanded social and economic equality over and above individual women's rights.... Eichner makes a strong case that the legacy of these women was to keep this strand of feminism and its agenda alive. -European History Quarterly 38:1 Jan. 2008

For 72 days following the disastrous 1871 Franco-Prussian War, working-class and socialist Parisians challenged the French government. At the end of May 1871, the French Army stormed the city, attacked the insurgents' barricades, and left over 25,000 rebels dead. Most textbooks ignore the role women played in this revolt. Eichner (women's studies, Univ. of South Florida) corrects this oversight. She uses three revolutionaries, Elisabeth Dmitrieff, Andre Leo, and Paule Mink to represent the greater number of nameless female communards who challenged the strict gender and class boundaries that relegated French women to a status equal to that of minor children. Chapters explore the short-lived Commune from a refreshingly new feminist perspective. Each of the three women brought their different strengths to this revolt, representing the differing constituencies of women present on the barricades. Dmitrieff excelled at labor organizing, Leo used her writing skills to challenge the accepted roles allocated by French society to all women, and Mink specialized in grassroots activism. Despite the failure of the Commune, all of Eichner's protagonists continued their public activism, refusing to allow their dreams for an egalitarian society to die. Summing Up: Recommended. Most academic levels/libraries.

Carolyn J. Eichner is a historian and Associate Professor of Women's Studies at the University of South Florida.

Introduction
Part I: Before
1. The Actors and the Action
2. Politics and Ideas: Setting the Stage
Part II: During
3. Elisabeth Dmitrieff and the Union des femmes: Revolutionizing Women's Labor
4. Andre Leo and the Subversion of Gender: The Battle Over Women's Place
5. Paule Mink and the clubistes: Anti-Clericalism and Popular Revolution
Part III: After
6. Dmitrieff and Leo in the Aftermath: Radicalizing History
7. Mink in the Aftermath: Radicalizing the Future
Conclusion
Notes
Bibliography
Index

NPB9780253217059
9780253217059
0253217059
Surmounting the Barricades: Women in the Paris Commune by Carolyn J. Eichner
Carolyn J. Eichner
New
Paperback
Indiana University Press
20041112
296
N/A
Book picture is for illustrative purposes only, actual binding, cover or edition may vary.
This is a new book - be the first to read this copy. With untouched pages and a perfect binding, your brand new copy is ready to be opened for the first time
Trustpilot