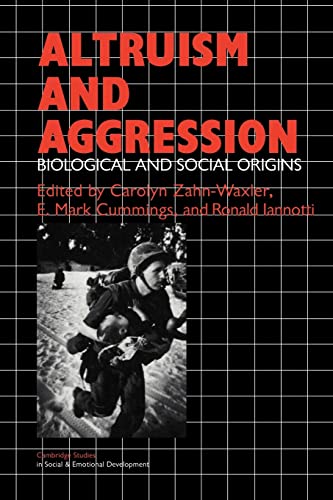 Altruism and Aggression
by Carolyn Zahn-Waxler

In Stock
$27.49
inc. GST
In this timely collection, biological and behavioral scientists address questions emerging from new research about the origins and interconnections of altruism and aggression within and across species. They explore the genetic underpinnings of affiliative and aggressive orientations as well as the biological correlates of these behaviors.
Like New Very Good
Only 1 left

Altruism and Aggression: Social and Biological Origins by Carolyn Zahn-Waxler

In this timely collection, biological and behavioral scientists address questions emerging from new research about the origins and interconnections of altruism and aggression within and across species. They explore the genetic underpinnings of affiliative and aggressive orientations as well as the biological correlates of these behaviors. They consider environmental variables - family patterns, child rearing practices - that influence prosocial and antisocial behaviors. And they examine internal processes such as empathy, socio-inferential abilities, and cognitive attributions, that regulate 'kindness' and 'selfishness'. The first section focuses on biological, sociobiological, and ethological approaches. It explores the utility of animal models for understanding both human and infrahuman social behavior. The second section focuses on the development, socialization, and mediation of altruism and aggression in children. Several concerns underly both sections. These include the role of attachment processes, separation distress, reciprocal interchanges, and social play in determining the quantity and quality of aggressive and affiliative interactions; the function of emotions (e.g. empathy, guilt, and anger) as instigators of altruism and aggression; and the nature of sex differences. Several chapters present data on emotions that mediate altruism and aggression and also on patterns of association between prosocial and antisocial behaviors. The authors take an ethological perspective, placing special importance on the need to explore altruism and aggression in the real lives and natural habitats of humans and other animals.

"...likely to be of considerable interest both to researchers working in relevant areas and to scientists and students from other disciplines..." Science
"Among the many merits in this book is the diversity of the psychological approaches represented, and these are admirably brought together..." Contemporary Psychology
"...the approaches and research strategies described in this book are the waves of the future..." New England Journal of Medicine

List of contributors, Editorial preface; Introduction; Part I. Biological, sociobiological, and ethological approaches to the stud of altruism and aggression: 1. The psychobiology of prosocial behaviors: separation distress, play, and altruism Jaak Panksepp; 2. An evolutionary and developmental perspective on aggressive patterns Robert B. Cairns; 3. Development in reciprocity through friendship James Youniss; 4. The prosocial and antisocial functions of preschool aggression: an ethological study of triadic conflict among young children F. F. Strayer and J. M. Noel; Part II. Development, socialization, and mediators of altruism and aggression in children: 5. A conception of the determinants and development of altruism and aggression: motives, the self, and the environment Ervin Staub; 6. Early organization of altruism and aggression: developmental patterns and individual differences E. Mark Cummings, Barbara Hollenbeck, Ronald Iannotti, Marian Radke-Yarrow, and Carolyn Zahn-Waxler; 7. Aggression and altruism: a personality perspective Seymour Feshbach and Norma Deitch Feshbach; 8. The socialization of prosocial behavior: theory and reality Joan E. Grusec and Theodore Dix; 9. Social-interactional patterns in families of abused and nonabused children John B. Reid; 10. Naturalistic observation of cooperation, helping, and sharing and their associations with empathy and affect Robert F. Marcus; 11. Social information-processing variables in the development of aggression and altruism in children Kenneth A. Dodge; Conclusions; Indexes.

GOR010522691
Altruism and Aggression: Social and Biological Origins by Carolyn Zahn-Waxler
Carolyn Zahn-Waxler
Cambridge Studies in Social and Emotional Development
Used - Like New
Paperback
Cambridge University Press
1991-07-26
352
0521423678
9780521423670
N/A
Book picture is for illustrative purposes only, actual binding, cover or edition may vary.
The book has been read, but looks new. The book cover has no visible wear, and the dust jacket is included if applicable. No missing or damaged pages, no tears, possible very minimal creasing, no underlining or highlighting of text, and no writing in the margins.