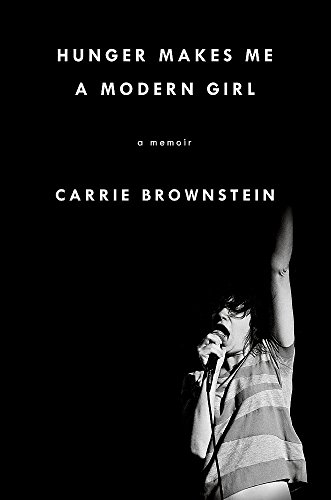 Hunger Makes Me a Modern Girl
by Carrie Brownstein

In Stock
$32.99
inc. GST
From the guitarist of the pioneering band Sleater-Kinney, a candid, funny, and deeply personal look at making a life-and finding yourself-in music.
Very Good Well Read
Only 1 left

Hunger Makes Me a Modern Girl: A Memoir by Carrie Brownstein

Before Carrie Brownstein became a music icon, she was a young girl growing up in the Pacific Northwest just as it was becoming the setting for one the most important movements in rock history. Seeking a sense of home and identity, she would discover both while moving from spectator to creator in experiencing the power and mystery of a live performance. With Sleater-Kinney, Brownstein and her bandmates rose to prominence in the burgeoning underground feminist punk-rock movement that would define music and pop culture in the 1990s. They would be cited as "America's best rock band" by legendary music critic Greil Marcus for their defiant, exuberant brand of punk that resisted labels and limitations, and redefined notions of gender in rock.

Hunger Makes Me a Modern Girl is an intimate and revealing narrative of her escape from a turbulent family life into a world where music was the means toward self-invention, community, and rescue. Along the way, Brownstein chronicles the excitement and contradictions within the era's flourishing and fiercely independent music subculture, including experiences that sowed the seeds for the observational satire of the popular television series Portlandia years later.

With deft, lucid prose Brownstein proves herself as formidable on the page as on the stage. Accessibly raw, honest and heartfelt, this book captures the experience of being a young woman, a born performer and an outsider, and ultimately finding one's true calling through hard work, courage and the intoxicating power of rock and roll.

The author writes focused and uncluttered prose, choosing the best, most telling details, as she recounts stories that show what it means to perform for the first time and what it means for a woman to be both a fan and a star in a staunchly male-dominated world. Unlike many rock star memoirs, there's no sense that this book is a chore or a marketing effort. It's revealing and riveting. On the page as in her songs, Brownstein finds the right words to give shape to experience * Kirkus *
Carrie Brownstein writes the way she plays guitar, with raw honesty, passion, and great humor * Vanity Fair *
She can play, but man, can Carrie Brownstein write . . . Her blazing memoir is lit by the same flair for adventure, fearless inquiry, and honesty that mark her gritty licks and trenchant vocals * Elle *
[A] glorious, grungy paean to losing yourself in music -- Sarra Manning * Red *
In the vast library of recent rock memoirs - just listing their authors would take up most of this review's space - Ms Brownstein's may be the one that most nakedly exposes its author's personality * New York Times *
[Brownstein's] honesty is disarming, and buoyed by the same dry wit that makes her scenester-lacerating IFC series Portlandia so good. That's how she artfully manages to transcend the backstage tropes of the rock-bio genre, and why Hunger should become the new handbook for every modern girl (and yes, boys, too) looking for the courage to pursue a life less ordinary * Entertainment Weekly *
Heartfelt and disarmingly honest . . . her greatest achievement here is in opening up about her most enduring adversary: herself * Independent *
Heartfelt and disarmingly honest, Hunger Makes Me A Modern Girl is far from a regular tale of rock'n'roll dissolution. It is, instead, a tale of a young woman with a complex interior life struggling to grow up and find her identity . . . It is the story of her struggle to belong * Independent on Sunday *
Revelatory, poignant and genuinely funny . . . this memoir reads like a rich and rewarding coming-of-age novel . . . Disarmingly honest and self-deprecating, it's inspirational reading for aspiring musicians, outsiders and anyone trying to make sense of their life * List *
Hunger Makes Me a Modern Girl succeeds on enough levels to make familiarity with Brownstein's career largely unnecessary . . . Brownstein's candid, poetic and ideas-strewn narrative supports a gripping tale * The Skinny *
The best memoir to come out of the '90s grunge scene * Vogue *
Enormously compelling, especially because Brownstein writes honestly -- Books of the year * AV Club *
A complex and moving portrait of one riot grrl's coming of age in America * Guardian *
Fans of Sleater Kinney and Brownstein the musician are in for a real treat * Hot Press *

Carrie Brownstein is a musician, writer and actor who first became widely known as the guitarist and vocalist of the band Sleater-Kinney and later as a creator, writer and co-star of the Emmy-nominated, Peabody Award winning television show Portlandia. Brownstein's writing has appeared in The New York Times, The Believer, Slate, and numerous anthologies on music and culture. She lives in Portland, Oregon and Los Angeles.

GOR007399097
Hunger Makes Me a Modern Girl: A Memoir by Carrie Brownstein
Carrie Brownstein
Used - Very Good
Paperback
Little, Brown Book Group
2015-10-27
256
0349007934
9780349007939
Short-listed for Lambda Literary Awards 2016 (UK) Long-listed for Penderyn Music Book Prize 2016 (UK) Long-listed for NME Awards 2016 (UK)
Book picture is for illustrative purposes only, actual binding, cover or edition may vary.
This is a used book - there is no escaping the fact it has been read by someone else and it will show signs of wear and previous use. Overall we expect it to be in very good condition, but if you are not entirely satisfied please get in touch with us.