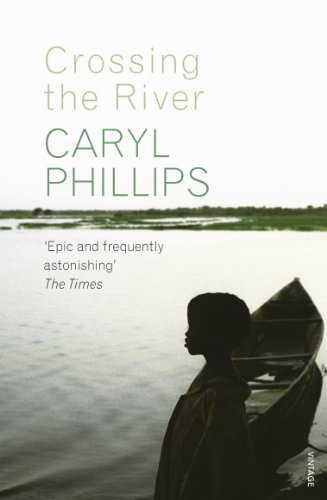 Crossing the River
by Caryl Phillips

Crossing the River by Caryl Phillips

Caryl Phillips' ambitious and powerful novel spans two hundred and fifty years of the African diaspora. It tracks two brothers and a sister on their separate journeys through different epochs and continents: one as a missionary to Liberia in the 1830s, one a pioneer on a wagon trail to the American West later that century, and one a GI posted to a Yorkshire village in the Second World War.

'Epic and frequently astonishing'
The Times

A compassionate, forceful and profoundly moving revelation * Scotland on Sunday *
[T]here are gems of impassioned writing quilted within this ambitious cross-cultural novel of loss and reconciliation * Sunday Times *
Epic and frequently astonishing * The Times *
Crossing the River is dense with event and ingeniously structured. It requires concentration and is worth it * Independent *
An ambitious exploration of oppression, loss and reconciliation that employs a collage of styles and ranges across continents and centuries -- Nicci Gerrard * Observer *

Caryl Phillips was born in St Kitts and now lives in London and New York. He has written for television, radio, theatre and cinema and is the author of twelve works of fiction and non-fiction. Crossing the River was shortlisted for the 1993 Booker Prize and won the James Tait Black Memorial Award. Caryl Phillips has also won the Martin Luther King Memorial Prize and a Guggenheim Fellowship, as well as being named the Sunday Times Young Writer of the Year 1992 and one of the Best of Young British Writers 1993. A Distant Shore won the Commonwealth Writers' Prize in 2004 and Dancing in the Dark was shortlisted in 2006.

GOR002763708
Crossing the River by Caryl Phillips
Caryl Phillips
Used - Very Good
Paperback
Vintage Publishing
2006-09-07
256
009949826X
9780099498261
N/A
Book picture is for illustrative purposes only, actual binding, cover or edition may vary.
This is a used book - there is no escaping the fact it has been read by someone else and it will show signs of wear and previous use. Overall we expect it to be in very good condition, but if you are not entirely satisfied please get in touch with us.