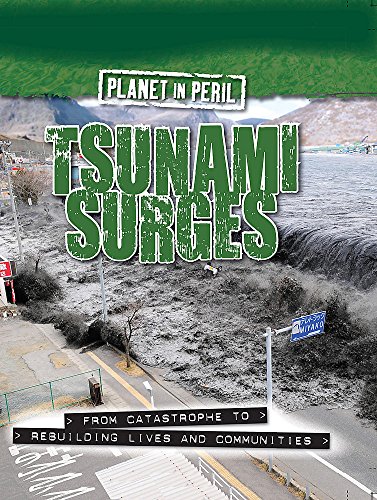 Out of Stock
$27.99
inc. GST
Find out about the tsunamis that have dominated new bulletins around the world in the past decade and learn how this natural disaster affects people globally on a daily basis.
Well Read
Only 0 left

Find out about the tsunamis that have hit the headlines over the past decade. Read about the devastating consequences of the two enormous tsunami waves that devastated first communities throughout south-east Asia in 2004, and then the coast of Japan in 2011. This book looks at why these occurrences are so difficult to predict and what happens to the affected communities after disaster has struck.

The Planet in Peril series answers these questions and many more, looking at three case studies of recent natural disasters to see what happened, how people coped in the aftermath, and how governments, charities and aid agencies work together to rebuild devastated communities.

Cath Senker is a children's non-fiction writer who specialises in writing about modern history, global issues and world religions. Her latest history titles include Living Through the Vietnam War (Raintree, 2011), Our World Divided: Israel and the Middle East (Wayland, 2011) and A Cultural History of Women in America: Women Claim the Vote (Bailey Publishing, 2011). She has a particular interest in the topics of migration, refugees and racism and recently wrote Mapping Global Issues: Immigrants and Refugees (Arcturus, 2011). In her work, Cath aims to highlight individuals' experiences and to present different viewpoints in a non-judgemental way as a basis for discussion. Cath also works as a project manager and editor on non-fiction titles for both children and adults. Before embarking on a freelance career, she worked as a commissioning editor for a children's educational publishing company for eight years. She is also an experienced ESOL teacher. Cath volunteers with City Reads, a project that aims to widen the enjoyment of books and reading among people of all ages, especially people from disadvantaged communities. She is a also a keen amateur cyclist, cook and gardener.

GOR010176299
Planet in Peril: Tsunami Surges by Cath Senker
Cath Senker
Planet in Peril
Used - Well Read
Paperback
Hachette Children's Group
2015-11-27
32
0750289090
9780750289092
N/A
Book picture is for illustrative purposes only, actual binding, cover or edition may vary.
This is a used book - there is no escaping the fact it has been read by someone else and it will show signs of wear and previous use. Overall we expect it to be in very good condition, but if you are not entirely satisfied please get in touch with us.