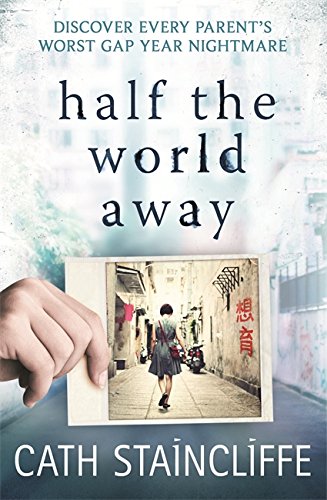 Half the World Away
by Cath Staincliffe

Half the World Away Summary

Half the World Away: a chilling evocation of a mother's worst nightmare by Cath Staincliffe

Newly graduated photography student Lori Maddox spends the year after university travelling and visits China where she finds work as a private English tutor. Back in Manchester, her parents Jo and Tom, who separated when Lori was a toddler, follow her adventures on her blog, 'Lori In The Orient'.

Suddenly communication stops and when the silence persists a frantic Jo and Tom report her missing. It is impossible to find out anything from 5,000 miles away so they travel out to Chengdu, a city in the south-western province of Sichuan, to search for their daughter.

Landing in a totally unfamiliar country, with no knowledge of the customs or language, and receiving scant help from the local authorities, Jo and Tom are forced to turn detective, following in their daughter's footsteps, tracing the people she mentioned in her posts, interviewing her friends, colleagues and students. It's an unbearably difficult challenge and, as the days pass, the fear that Lori is lost for good grows ever larger.

Half the World Away Reviews

Cath Staincliffe is an award winning novelist, radio playwright and creator of ITV's hit series Blue Murder. Cath's books have been shortlisted for the CWA Best First Novel award. She was joint winner of the CWA Short Story Dagger in 2012. Letters To My Daughter's Killer was selected for the Specsavers Crime Thriller Book Club on ITV3 in 2014. Cath also writes the Scott & Bailey books based on the popular ITV series. She lives with her family in Manchester.

GOR006927106
Half the World Away: a chilling evocation of a mother's worst nightmare by Cath Staincliffe
Cath Staincliffe
Used - Very Good
Paperback
Little, Brown Book Group
2015-06-04
336
1472121031
9781472121035
N/A
Book picture is for illustrative purposes only, actual binding, cover or edition may vary.
This is a used book - there is no escaping the fact it has been read by someone else and it will show signs of wear and previous use. Overall we expect it to be in very good condition, but if you are not entirely satisfied please get in touch with us.