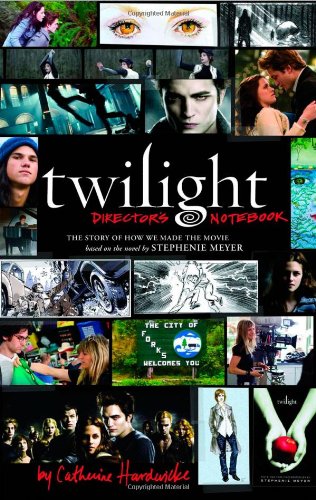 Twilight: Director's Notebook: The Story of How We Made the Movie Based on the Novel by Stephenie Meyer by Catherine Hardwicke

A personal, behind-the-scenes look at the making of the blockbuster film Twilight from groundbreaking director Catherine Hardwicke!

This intimate full-color "notebook", designed to replicate the one director Catherine Hardwicke kept on and off the set, takes you through the creative process that went into making Stephenie Meyer's breathtaking novel come alive on screen - from casting to costumes, stunts to story boards. With never-before-seen notes, sketches, and photographs taken directly from the visionary director's personal notebook, this book includes everything from her visual inspirations, to step-by-step breakdowns of action sequences, to a behind the scenes look at some of the most pivotal moments in the creation of the film, and much more.

Get the inside story - this collectible notebook will be a must-have addition to every Twilight fan's bookshelf!

Praise for the film Twilight
"Epic! Sexy, stylish and altogether the coolest movie of the year"
- Shawn Edwards, Fox TV

". . . getting Catherine Hardwicke to direct Twilight was a shrewd move, because the youthquake specialists of Thirteen treats teen confusion without a trace of condensation. . . .She has reconjured Meyer's novel as a cloudburst mood piece filled with stormy skies, rippling hormones, and understated visual effects."
- Owen Gleiberman, Entertainment Weekly

"Hardwicke has connected so intensely to the Meyer novel that it's hard to imagine anyone else making a better version."
- Kenneth Turan, Los Angeles Times

Catherine Hardwicke trained as an architect at the University of Texas and started in film as a production designer. She designed over 20 films, including Tombstone, Tank Girl, Three Kings, and Vanilla Sky. Hardwicke's debut as a feature film co-writer and director was the Sundance award-winning Thirteen. Made for under two million dollars, it garnered an Academy Award nomination for Holly Hunter. She has since directed Lords of Dogtown, The Nativity Story, and most recently, Twilight. She lives in Venice Beach, California, with Jamie Marshall and her cat, The Black Velvet Luxury Item.

GOR002744430
Twilight: Director's Notebook: The Story of How We Made the Movie Based on the Novel by Stephenie Meyer by Catherine Hardwicke
Catherine Hardwicke
Used - Very Good
Hardback
Little, Brown & Company
2009-03-17
163
0316070521
9780316070522
N/A
Book picture is for illustrative purposes only, actual binding, cover or edition may vary.
This is a used book - there is no escaping the fact it has been read by someone else and it will show signs of wear and previous use. Overall we expect it to be in very good condition, but if you are not entirely satisfied please get in touch with us.