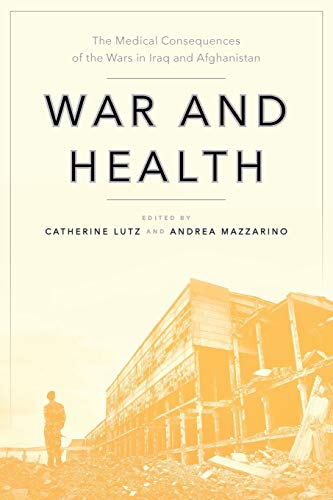 War and Health by Catherine Lutz

War and Health: The Medical Consequences of the Wars in Iraq and Afghanistan by Catherine Lutz

Provides a detailed look at how war affects human life and health far beyond the battlefield
Since 2010, a team of activists, social scientists, and physicians have monitored the lives lost as a result of the US wars in Iraq, Afghanistan, and Pakistan through an initiative called the Costs of War Project. Unlike most studies of war casualties, this research looks beyond lives lost in violence to consider those who have died as a result of illness, injuries, and malnutrition that would not have occurred had the war not taken place. Incredibly, the Cost of War Project has found that, of the more than 1,000,000 lives lost in the recent US wars, a minimum of 800,000 died not from violence, but from indirect causes.
War and Health offers a critical examination of these indirect casualties, examining health outcomes on the battlefield and elsewhere-in hospitals, homes, and refugee camps-both during combat and in the years following, as communities struggle to live normal lives despite decimated social services, lack of access to medical care, ongoing illness and disability, malnutrition, loss of infrastructure, and increased substance abuse. The volume considers the effect of the war on both civilians and on US service members, in war zones-where healthcare systems have been destroyed by long-term conflict-and in the United States, where healthcare is highly developed. Ultimately, it draws much-needed attention to the far-reaching health consequences of the recent US wars, and argues that we cannot go to war-and remain at war-without understanding the catastrophic effect war has on the entire ecosystem of human health.