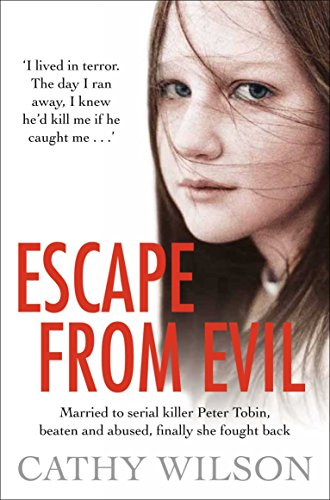 Escape From Evil by Cathy Wilson

The compelling true story of a woman who survived marriage to one of our most notorious serial killers.

Escape From Evil by Cathy Wilson

Cathy was just sixteen, and living on her own, when she met a charming older man called Peter Tobin. She saw him as a knight in shining armour, a man who made her feel safe. He saw a vulnerable girl whose troubled childhood made her the perfect victim.

This considerate man, who appeared so normal to anyone who met him, became first controlling, then violent, and Cathy found herself trapped in a terrifyingly abusive marriage. Eventually, for the sake of her young son, she found the strength to escape and over the years managed to create a good life for her boy, making sure he never had the memories of fear and daily trauma she had suffered. Still Tobin remained a threatening presence in the background. Then, turning on the television set in 2006, she screamed with horror when a familiar face appeared on the news. Her ex-husband, her son's father, was a serial killer.

Writing with complete honesty, Cathy describes her marriage, and how the past continued to haunt her until she stood in court, a witness against the man who could so easily have murdered her too. Totally compelling Escape From Evil is the story of a woman who survived the worst nightmare of all.

Cathy Wilson lives near Portsmouth with her son and partner.
GOR010471422
9780330538473
0330538470
Escape From Evil by Cathy Wilson
Cathy Wilson
Used - Like New
Paperback
Pan Macmillan
2011-09-16
368
N/A
Book picture is for illustrative purposes only, actual binding, cover or edition may vary.
The book has been read, but looks new. The book cover has no visible wear, and the dust jacket is included if applicable. No missing or damaged pages, no tears, possible very minimal creasing, no underlining or highlighting of text, and no writing in the margins
Trustpilot