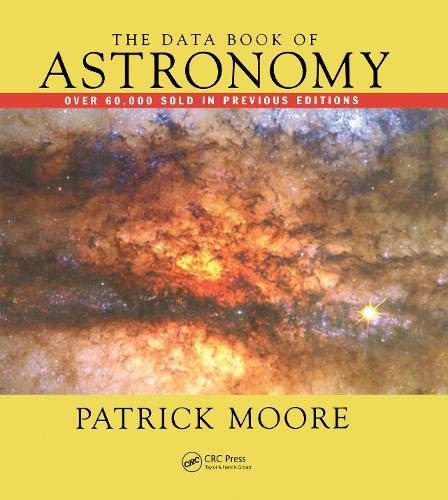 Out of Stock
$72.99
inc. GST
Filled with data about the Earth, Moon, the planets, the stars, our Galaxy, and the myriad galaxies in deep space, this title reveals the scientific discoveries about black holes, quasars, and origins of the Universe. It also includes maps supported by tables of the names, positions, magnitudes, and spectra of the main stars in each constellation.
Good
Only 0 left

The Data Book of Astronomy Summary

The Data Book of Astronomy is a one-stop reference for astronomers at all levels of experience, from beginners to experienced observers. Filled with data about the Earth, Moon, the planets, the stars, our Galaxy, and the myriad galaxies in deep space, it also reveals the latest scientific discoveries about black holes, quasars, and the origins of the Universe.

Written by a premier astronomy expert, this book begins with a discussion of the Sun, from sunspots to solar eclipses. It then features over 100 tables on characteristics of the Moon, and the names, positions, sizes, and other key descriptors of all the planets and their satellites. The book tabulates solar and lunar eclipse, comets, close-approach asteroids, and significant meteor showers dates. Twenty-four maps show the surface features of the planets and their moons. The author then looks to the stars, their distances and movements, and their detailed classification and evolution. Forty-eight star charts cover both northern and southern hemispheres, enabling you to track down and name the main stars in all the constellations.

The maps are supported by detailed tables of the names, positions, magnitudes, and spectra of the main stars in each constellation, along with key data on galaxies, nebulae, and clusters. There is a useful catalogue of the world's great telescopes and observatories, a history of astronomy and of space research, and biographies of 250 astronomers who have been most influential in developing the current understanding of the subject.

The Data Book of Astronomy Reviews

"Patrick Moore is the leading presenter and educator in astronomy of our age - this little book is all one needs to enjoy and learn something of this endlessly fascinating subject." - Paul Murdin, Editor-in-Chief Macmillan/IOP Encyclopedia of Astronomy and Astrophysics "This book not only contains current data collected by spacecraft but also gives a lot of information seldom cited in scientific literature on the Moon and the Sun, the planets and stars, our Galaxy and numerous other galaxies. It also reveals the latest scientific discoveries about black holes, quasars and the origin of the Universe . . .One of the main characteristics of this book is the extensive range of problems discussed - from the smallest particles and minor planets to the infinite Universe! Even the most complicated questions are discussed briefly and clearly." -E B Kostyakova and G A Leikin in Astronomical and Astrophysical Transactions "We have here a veritable base of information which should find itself on every astonomer's shelves and, above all, in every amateur club." -L'Astronomie "This reference book will be welcomed by all astronomers from beginners to experienced observers" ASLIB Book Guide .." a substantial piece of writing" -The Observatory "This book fills a niche in which the reader is presented with detailed astronomical data and concise explanations, all at an accessible level. . . it is an excellent resource, and probably will be the first book I shall reach for when wanting an initial quick reference." -Gordon Bosch in MNASSA Vol. 60, Nos. 1 and 2

The History of Astronomy