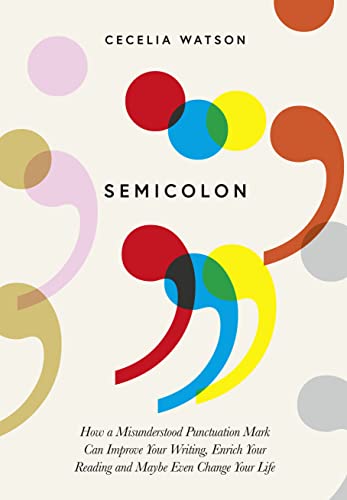 'Fascinating... I loved this book; I really did' David Crystal, Spectator

A biography of a much misunderstood punctuation mark and a call to arms in favour of clear expression and against stifling grammar rules.

Semicolon: How a misunderstood punctuation mark can improve your writing, enrich your reading and even change your life by Cecelia Watson

'Fascinating... I loved this book; I really did' David Crystal, Spectator

A biography of a much misunderstood punctuation mark and a call to arms in favour of clear expression and against stifling grammar rules.

Cecelia Watson used to be obsessive about grammar rules. But then she began teaching. And that was when she realized that strict rules aren't always the best way of teaching people how to make words say what they want them to; that they are even, sometimes, best ignored.

One punctuation mark encapsulates this thorny issue more clearly than any other. The semicolon. Hated by Stephen King, Hemingway, Vonnegut and Orwell, and loved by Herman Melville, Henry James and Rebecca Solnit, it is the most divisive punctuation mark in the English language, and many are too scared to go near it. But why? When is it effective? Have we been misusing it? Should we even care?

In this warm, funny, enlightening and thoroughly original book, Cecelia Watson takes us on a whistle-stop tour of the surprising history of the semicolon and explores the remarkable power it can wield, if only we would stop being afraid of it.

Forget the rules; you're in charge. It's time to make language do what you want it to.

'I have no views on the semicolon. Or at least I thought I didn't ... Then I read Semicolon by Cecelia Watson ... She has hunted down the very finest examples of semicolons in use, in order to prove how poorly rules serve us' Financial Times

'A neat and immaculate manifesto for opening our hearts to the semicolon. In taking us through the history of the neither-one-thing-nor-the-other squiggle, she illustrates without any hectoring why the rules of language are very much there to be broken precisely because no one can fully agree on what exactly they are' Irish Independent

'Look, some people just enjoy arguing about punctuation. It's in their nature. But if your enthusiasm for this polarizing little mark stems from adoration and inquisitiveness (and only occasionally the haughty knowledge that you're right), Cecelia Watson's "biography" of the semicolon will be a delightful companion' Elle

'An argument for deep knowledge and style awareness, moving beyond strictures to something educated, intuitive, and graceful' New York Journal of Books

'In this impressive debut, Watson . . . takes readers through a lively and varied 'biography' of the semicolon. . . . The stress on compassionate punctuation lifts this work from an entertaining romp to a volume worth serious consideration' Publishers Weekly

'Informed and witty . . . from chapter to chapter, [Watson] brings a gadfly's spirit to the proceedings, thoughtfully lobbying for written English that resists restrictions and recognizes that "rules will be, just as they always have been, inadequate to form a protective fence around English"' Kirkus Reviews

'In Cecelia Watson's hands, what starts as an exploration of the obscure origins of a modest punctuation mark becomes a slyly profound proof of the value of creative freedom itself. Grammar fiends and poetic anarchists alike will find Semicolon inspiring, challenging, and delightful' Adrian Johns, Allan Grant Maclear Professor of History, University of Chicago

Cecelia Watson is a historian and philosopher of science, and a teacher of writing and the humanities. She is currently on Bard College's Faculty in Language and Thinking. Previously she was an American Council of Learned Societies New Faculty Fellow at Yale University, where she was also a fellow of the Whitney Center for the Humanities and was jointly appointed in the humanities and philosophy departments.

GOR010023257
Semicolon: How a misunderstood punctuation mark can improve your writing, enrich your reading and even change your life by Cecelia Watson
Cecelia Watson
Used - Very Good
Hardback
HarperCollins Publishers
2019-08-08
224
0008291535
9780008291532
N/A
Book picture is for illustrative purposes only, actual binding, cover or edition may vary.
This is a used book - there is no escaping the fact it has been read by someone else and it will show signs of wear and previous use. Overall we expect it to be in very good condition, but if you are not entirely satisfied please get in touch with us.