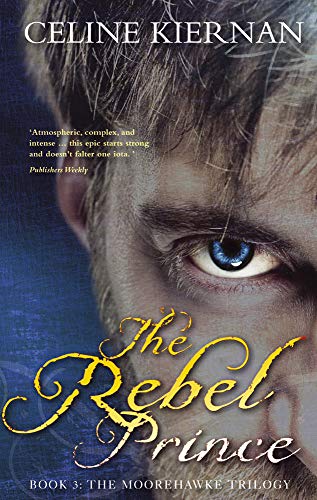 The Rebel Prince
by Celine Kiernan

United Friends. A Divided Kingdom. Who will prevail?

After a joyful reunion, it seems that the years of war have left their scars on brothers Alberon and Razi, and it is not long before their differences come between them. Who will survive the final battle?

The Rebel Prince by Celine Kiernan

Front Cover Quote: 'This is marvellous, vivid writing, and storytelling at its absolute best. It reminded me of the first time I read Philip Pullman. I was utterly engrossed.' RODDY DOYLE on The Poison Throne

Back Cover: '... all the ingredients of an international bestseller. The writing is extraordinary.' Sarah Webb, Irish Independent 'Atmospheric, complex, and intense ... this epic starts strong and doesn't falter one iota, ending with a cliffhanger that will leave readers demanding more.' Publisher's Weekly

Blurb: Shoutline: United Friends. A Divided Kingdom. Who will prevail?

After a joyful reunion, it seems that the years of war have left their scars on brothers Alberon and Razi, and it is not long before their differences come between them. Alberon is determined to protect the Kingdom by strength rather than diplomacy. He proudly reveals his great hope - Lorcan Moorehawke's 'Bloody Machine'. But Razi fears the Machine will rot the Kingdom's soul and undo all the good that their father has achieved in his short reign. Despite her qualms about Alberon's choice of allies, Wynter finds herself siding with him against her friends. But when the last envoys to Alberon's camp turn out to be the Loups-Garous, Wynter's loyalty to the Kingdom and its future are stretched to their limit. How can she stand by as Alberon negotiates with the tribe that blighted Christopher's life? Who will survive the final battle?

'This third in the Moorehawke Trilogy continues the fast and bloody pace, while still capable of being read as a stand-alone. Each character satisfyingly grows exponentially into his or her own potential. Although having been primed to adore him for the f

'tight writing, passion and violence, plus plenty of skullduggery and intrigue combine to make this a compelling read'

'Strongest possible recommendation - although obviously I'd suggest you grab the first couple before reading to get the full story!'

'an amazing conclusion to what's probably become one of my three favourite fantasy trilogies of all time, while Kiernan's thought-provoking writing has made her jump right to the top of the list of authors whose next works I'm eagerly awaiting

The Rebel Prince is a fitting final chapter for the series. Wynter's progress 'from dependent young girl to insightful and self-confident woman is a carefully done, and Kiernan's world, full of mysterious wandering tribes, rich history, and the possibilit

'Celine Kiernan brings her Moorehawke trilogy to a gothically atmospheric ending ... the joy is in the anticipation and the depth of character formation'

'Kiernan is a gifted storyteller ... The Moorehawke Trilogy is a debut series to be reckoned with'

'With a fast-paced plot, well-drawn characters, and a brilliantly-imagined world, The Rebel Prince is a pleasure to read'

'powerful historical fantasy series ... Kiernan's use of dialogue is strong and her detailed description of the world that the characters inhabit draws the reader in ... as the final instalment of the trilogy, we must also expect a fairly dramatic climax

'This was a wonderful read for me. One I barreled quickly through, not wanting to put the book down ... This was a wonderful end to an amazing trilogy ... I'm proud to say this is one that will stay on the shelves for years to come and I will revisit aga

Celine Kiernan is an Irish author of fantasy novels for young adults. She is best known for The Moorehawke Trilogy. Her fourth book, Into the Grey, won both the CBI Book of the Year Award and the CBI Children's Choice Award in 2012. It won the 2013 Readers' Association of Ireland Award for best book. Born and raised in Dublin, she now lives in Virginia, Co. Cavan.

GOR002750050
The Rebel Prince by Celine Kiernan
Celine Kiernan
Moorehawke
Used - Very Good
Paperback
O'Brien Press Ltd
2010-09-06
416
1847171125
9781847171122
N/A
Book picture is for illustrative purposes only, actual binding, cover or edition may vary.
This is a used book - there is no escaping the fact it has been read by someone else and it will show signs of wear and previous use. Overall we expect it to be in very good condition, but if you are not entirely satisfied please get in touch with us.