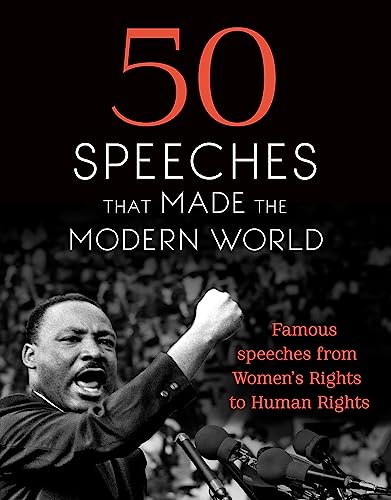 50 Speeches That Made the Modern World
by Chambers

Used Price
$37.99
inc. GST
Free Shipping in Australia
A collection of 50 of the most significant speeches from around the globe that demonstrably changed the modern world and analysis into the impact they had.
Like New Very Good

50 Speeches That Made the Modern World Summary

50 Speeches That Made the Modern World: Famous Speeches from Women's Rights to Human Rights by Chambers

Throughout history, great speeches have produced great change. From inciting violence and asserting control to restoring peace and securing freedom, nothing has the raw emotional power of a speech delivered at the right moment, in the right place, with the right content, and the right delivery.

50 Speeches That Made The Modern World is a celebration of the most influential and thought-provoking speeches that have shaped the world we live in. With comprehensive, chronological coverage of speeches from the 20th and 21st centuries, taken from all corners of the globe, it covers Emmeline Pankhurst's patiently reasoned condemnation of men's failure to improve ordinary women's lives in 1908 through speeches by Vladimir Lenin, Mahatma Gandhi, David Ben-Gurion, Albert Einstein, Fidel Castro, Nikita Khrushchev, Ernesto 'Che' Guevara, Martin Luther King, Malcolm X, Nelson Mandela, Benazir Bhutto, Osama Bin Laden and Aung San Suu Kyi, right up to the most compelling oratory surrounding the 2016 US Presidential elections.

Through the rallying propaganda speeches during World War II to the cautious rhetoric of the Cold War period, through challenging the status quo on issues of race, gender and politics to public addresses to the masses on the issues of AIDS and terrorism, through apologies, complaints, warmongering, scaremongering and passionate pleas, this book delivers the most important speeches of the modern era and why they still remain so significant.

Each speech has an introduction explaining its setting, importance and impact as well as marginal notes filling in any background information.

Andrew Burnet is a writer, editor and publishing manager based in Edinburgh, Scotland. He has worked for newspapers, magazines, commercial publishers, government agencies and charities. He has written or edited nearly 50 guidebooks for historic visitor attractions and museums. He was the compiling editor of Chambers Book of Speeches, and has also contributed to Chambers Biographical Dictionary.

GOR008021825
50 Speeches That Made the Modern World: Famous Speeches from Women's Rights to Human Rights by Chambers
Chambers
Used - Like New
Hardback
John Murray Press
2016-10-06
256
1473640946
9781473640948
N/A
Book picture is for illustrative purposes only, actual binding, cover or edition may vary.
The book has been read, but looks new. The book cover has no visible wear, and the dust jacket is included if applicable. No missing or damaged pages, no tears, possible very minimal creasing, no underlining or highlighting of text, and no writing in the margins.