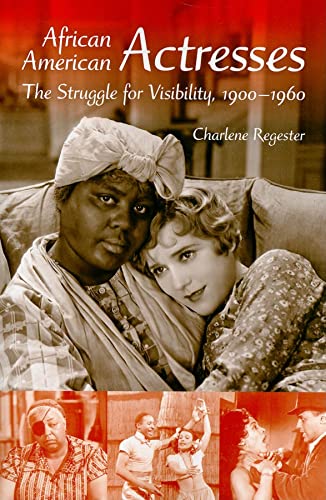 Regester repositions these actresses to highlight their contributions to cinema in the first half of the 20th century, taking an informed theoretical, historical, and critical approach.

African American Actresses: The Struggle for Visibility, 1900-1960 by Charlene B. Regester

Nine actresses, from Madame Sul-Te-Wan in Birth of a Nation (1915) to Ethel Waters in Member of the Wedding (1952), are profiled in African American Actresses. Charlene Regester poses questions about prevailing racial politics, on-screen and off-screen identities, and black stardom and white stardom. She reveals how these women fought for their roles as well as what they compromised (or didn't compromise). Regester repositions these actresses to highlight their contributions to cinema in the first half of the 20th century, taking an informed theoretical, historical, and critical approach.

African American Actresses is an important addition to film history, film studies, and African American studies because it illuminates those who were often invisible. Regester's historical work is to be lauded as it uncovers significant information.

Regester's work is an important synthesis of previous studies in the fields of film studies and history. Vol. 98.1, June 2011

* The Journal of American History *

What Regester does well is present a holistic portrait of the lives of these women. She fuses both the personal and the professional into this narrative. Reviews of films, personal statements by the actresses to the press, and newspaper articles referencing the actresses' private lives provide the reader with a behind the scenes portrait of their struggles. Vol. 23 Issue 2, 2011

An exemplary study of race in US cinema, this is easily the best book on the subject to date. . . . Essential.

A major tribute to nine talented black actresses and their complicated negotiations with white mainstream entertainment industry before Civil Rights, African American Actresses is an invaluable asset for students of ethnicity and race in Hollywood. Not only does Regester bring the early twentieth century American racial scene alive by detailing the politics that informed choices and roles of African American women actors, she also contributes richly to studies of stardom as refracted by the socio-cultural and political status of black people and women in America.

Charlene Regester is Associate Professor of African and Afro-American Studies at the University of North Carolina Chapel Hill. She is co-editor of the Oscar Micheaux Society Newsletter and serves on the editorial board of the Journal of Film and Video.