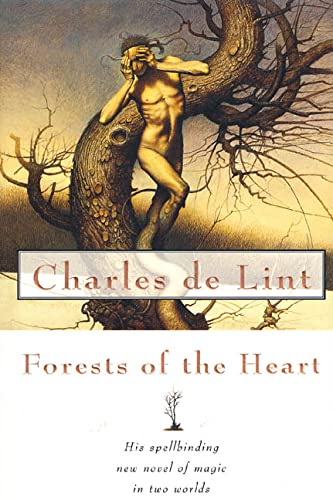 Forests of the Heart by Charles De Lint

Bettina is one of the few humans who can see the Gentry, old world spirits who appear as dark and dangerous men, and she stays clear of them, until one night when one follows her to the woods and takes her hand.

Forests of the Heart by Charles De Lint

In the Old Country, they called them the Gentry: ancient spirits of the land, magical, amoral, and dangerous. When the Irish emigrated to North America, some of the Gentry followed...only to find that the New World already had spirits of its own, called "manitou" and other such names by the Native tribes.
Now generations have passed, and the Irish have made homes in the new land, but the Gentry still wander homeless on the city streets. Gathering in the city shadows, they bide their time and dream of power. As their dreams grow harder, darker, fiercer, so do the Gentry themselves--appearing, to those with the sight to see them, as hard and dangerous men, invariably dressed in black.
Bettina can see the Gentry, and knows them for what they are. Part Indian, part Mexican, she was raised by her grandmother to understand the spirit world. Now she lives in Kellygnow, a massive old house run as an arts colony on the outskirts of Newford, a world away from the Southwestern desert of her youth. Outsider her nighttime window, she often spies the dark men, squatting in the snow, smoking, brooding, waiting. She calls them "los lobos," the wolves, and stays clear of them--until the night one follows her to the woods, and takes her hand....
Ellie, an independent young sculptor, is another with magic in her blood, but she refuses to believe it, even though she, too, sees the dark men. A strange old woman has summoned Ellie to Kellygnow to create a mask for her based on an ancient Celtic artifact. It is the mask of the mythic Summer King--another thing Ellie does not believe in. Yet lack of belief won't dim the power of the mast, or its dreadful intent.
Donal, Ellie's former lover, comes from an Irish family and knows the truth at the heart of the old myths. He thinks he can use the mask and the "hard men" for his own purposes. And Donal's sister, Miki, a punk accordion player, stands on the other side of the Gentry's battle with the Native spirits of the land. She knows that more than her brother's soul is at stake. All of Newford is threatened, human and mythic beings alike.
Once again Charles de Lint weaves the mythic traditions of many cultures into a seamless cloth, bringing folklore, music, and unforgettable characters to life on modern city streets.
"De Lint is a romantic; he believes in the great things, faith, hope, and charity (especially if love is included in the last), but he also believes in the power of magic--or at least the magic of fiction--to open our eyes to a larger world." --"Edmonton Journal"
"De Lint is a master of the modern urban folktale." --"The Denver Post"
"In De Lint's capable hands, modern fantasy becomes something other than escapism. It becomes folk song, the stuff of urban myth." --"The Phoenix Gazette"
"De Lint is as engaging a stylist as Stephen King, but considerably more inventive and ambitious." --"Toronto Globe and Mail"
Born in Holland in 1951, Charles de Lint grew up in Canada, with a few years off in Turkey, Lebanon, and Switzerland.
Although his first novel was 1984's "The Riddle of the Wren," it was with" Moonheart," published later that same year, that de Lint made his mark, and established him at the forefront of "urban fantasy," modern fantasy storytelling set on contemporary city streets. " Moonheart "was set in and around "Newford," an imaginary modern North American city, and many of de Lint's subsequent novels have been set in Newford as well, with a growing cast of characters who weave their way in and out of the stories. The Newford novels include" Spirit Walk, Memory and Dream, Trader, Someplace To Be Flying, Forests of the Heart, The Onion Girl, "and" Spirits in the Wires." In addition, de Lint has published several collections of Newford short stories, including "Moonlight and Vines," for which he won the World Fantasy Award. Among de Lint's many other novels are "Mulengro, Jack the Giant-Killer, "and" The Little Country."
Married since 1980 to his fellow musician MaryAnn Harris, Charles de Lint lives in Ottawa, Ontario, Canada.
GOR010932390
9780312865191
0312865198
Forests of the Heart by Charles De Lint
Charles De Lint
Used - Like New
Hardback
St Martin's Press
2000-06-29
397
N/A
Book picture is for illustrative purposes only, actual binding, cover or edition may vary.
The book has been read, but looks new. The book cover has no visible wear, and the dust jacket is included if applicable. No missing or damaged pages, no tears, possible very minimal creasing, no underlining or highlighting of text, and no writing in the margins
Trustpilot