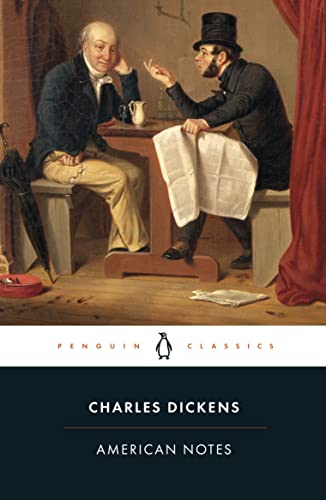 In Stock
$20.99
inc. GST
When Charles Dickens set out for America in 1842 he was the most famous man of his day to travel there - curious about the revolutionary new civilization that had captured the English imagination.
Very Good Good Well Read
Only 2 left

American Notes is a fascinating account of nineteenth-century America sketched with Charles Dickens's characteristic wit and charm. This Penguin Classics edition is edited with notes and an introduction by Patricia Ingham.

When Charles Dickens set out for America in 1842 he was the most famous man of his day to travel there - curious about the revolutionary new civilization that had captured the English imagination. His frank and often humorous descriptions cover everything from his comically wretched sea voyage to his sheer astonishment at the magnificence of the Niagara Falls, while he also visited hospitals, prisons and law courts and found them exemplary. But Dickens's opinion of America as a land ruled by money, built on slavery, with a corrupt press and unsavoury manners, provoked a hostile reaction on both sides of the Atlantic. American Notes is an illuminating account of a great writer's revelatory encounter with the New World.

In her introduction, Patricia Ingham examines the response the book received when it was published, and compares it with similar travel writings of the period and with Dickens's fiction, in particular Martin Chuzzlewit. This edition includes an updated chronology, appendices and notes.

If you enjoyed American Notes, you might like Dickens's Pictures from Italy, also available in Penguin Classics.

Charles Dickens (1812-70) was a political reporter and journalist whose popularity was established by the phenomenally successful PICKWICK PAPERS (1836-7). His novels captured and held the public imagination over a period of more than thirty years. He is considered one of the greatest novelists in the English language.

Patricia Ingham is Fellow of St Anne's College, Reader in English, and The Times Lecturer in English at the University of Oxford.

GOR001704216
American Notes by Charles Dickens
Charles Dickens
Used - Very Good
Paperback
Penguin Books Ltd
2000-10-26
352
0140436499
9780140436495
N/A
Book picture is for illustrative purposes only, actual binding, cover or edition may vary.
This is a used book - there is no escaping the fact it has been read by someone else and it will show signs of wear and previous use. Overall we expect it to be in very good condition, but if you are not entirely satisfied please get in touch with us.