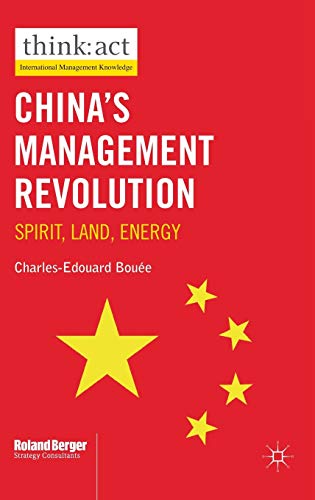 Used Price
38,99 $
inc. GST
Free Shipping in Australia
As one of the world's largest economies China is facing many unique management challenges in the wake of the financial crisis. The future presents many opportunities for growth and commerce but new management skills must be developed to cope with these issues.
Very Good

As one of the world's largest economies China is facing many unique management challenges in the wake of the financial crisis. The future presents many opportunities for growth and commerce but new management skills must be developed to cope with these issues.

'Chinese entrepreneurs have made remarkable progress by following the Western business model. At the same time, through their diligence and practicality they have become more mature and created their own unique Chinese business model. In 'China's Management Revolution,' Mr. Charles-Edouard Bouee sums up the features of the Chinese management model, which integrates Western business culture with Chinese business wisdom. It's a great contribution to the enrichment of the global management model.' - JIN Zhiguo, Chairman of Tsingtao Brewery Co., Ltd.

'This book is a genuine attempt in unraveling the dynamics of what's called "Chinese-style management", against the backdrop of China's rise as an emerging economic power. In writing this book Charles-Edouard Bouee has done a good service as well offer an insider's perspective for international businessmen who want to do business in China. As a leading strategist, he understands that he is in the business of offering good and practical solutions.' - Lifen Zhang, Associate Editor, Financial Times, Editor-in-Chief, FTChinese.com

'Eloquently written, this book presents important new insights for management theory and practice from China where private entrepreneurs' wholehearted embrace of the US management style has given way to a distinctly Chinese way of doing business. Bouee, a French investment banker with an American academic degree and head of a European consultancy's operations in China, brings a profound understanding of different management styles to his exploration of this shift.' - Soumitra Dutta, Professor of Business and Technology, Academic Director, eLab, INSEAD

'China has been delivering economic miracles. However, it remains a mystery how Chinese enterprises are managed. While the Chinese endeavor to learn from Western experience, they have retained their unique management philosophy and culture. We should therefore try to understand the diverse management styles of Chinese companies as they are playing a more active role on the global stage. This book is a timely guide for Western readers to help them understand the truth of Chinese management.' - Ning Xiangdong, Professor, School of Economics and Management, and Director, Center for Corporate Governance, Tsinghua University

Charles-Edouard Bouee is President of Roland Berger Strategy Consultants, Asia, has been a member of the firm's Global Executive Committee since July 2010, and is Chairman of the French, Belgian and North Africa offices. He joined the firm as Senior Partner in the Paris Office, where he headed the Financial Services and Utility & Energy Competence Centers, and the firm's private equity activities. Before joining Roland Berger he was Vice President of another leading strategy consulting firm from 1997 to 2001.

Mr. Bouee began his career at Societe Generale as an investment banker in Paris and London, where he was involved in projects in Europe, the Middle-East, America and Asia working mainly on strategy, mergers and acquisitions and large-scale performance improvement projects.

He is an economic advisor to the French Government (Conseiller du Commerce Exterieur) in China, and a member of the Shanghai board of the European Chamber of Commerce in China, where he has promoted co-operation among member companies, governments and business communities in both China and Europe. In 2010, he was awarded the Magnolia Award by the Shanghai Municipal Government for his civic leadership and business contributions to Shanghai's development. Mr. Bouee is a frequent guest analyst onfinancial news media such as Bloomberg and CNBC.

He holds a Masters degree in Business Administration from Harvard Business School, a Master of Science degree from Ecole Centrale Paris and a Master's degree in Law from Paris University.

Preface Introduction PART I: THE AMERICAN EXPERIMENT (1978-2008) The Road From Isolation The Turning Point PART II: THREE PILLARS The Origins Of Chinese Management The Cultural Heritage Change And Continuity (Government) The Spirit Of Enterprise China Inc. Strangers In A Strange Land No Business Without China

GOR007751223
China's Management Revolution: Spirit, land, energy by Charles-Edouard Bouee
Charles-Edouard Bouee
International Management Knowledge
Used - Very Good
Hardback
Palgrave Macmillan
2010-11-24
202
0230285457
9780230285453
N/A
Book picture is for illustrative purposes only, actual binding, cover or edition may vary.
This is a used book - there is no escaping the fact it has been read by someone else and it will show signs of wear and previous use. Overall we expect it to be in very good condition, but if you are not entirely satisfied please get in touch with us.