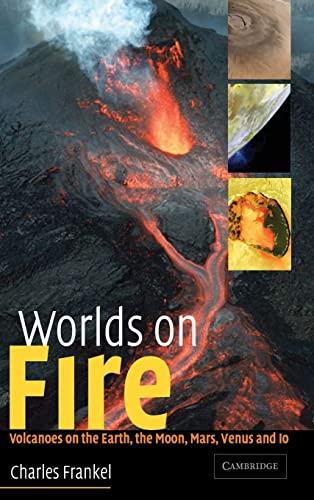 Worlds on Fire
by Charles Frankel

In Stock
33,99 $
inc. GST
Worlds on Fire takes the reader on a fascinating tour of the mightiest volcanoes in the solar system, from Mars' tallest volcano to the churning lava lakes on Io. This highly readable 2005 book, illustrated with the most recent imagery from spacecraft, conveys the wonders and excitement of space exploration.
Very Good Good
7 in stock

Worlds on Fire: Volcanoes on the Earth, the Moon, Mars, Venus and Io by Charles Frankel

Worlds on Fire takes the reader on a fascinating tour of the mightiest volcanoes in the solar system. From Kilauea volcano in Hawaii and Mount Etna in Sicily, it leaps to the lava fields and rilles of the Moon, retraces the historic footsteps of the Apollo astronauts and describes new volcanic provinces to explore. The three largest volcanoes of Mars - Olympus Mons, Alba Patera and Arsia Mons - are profiled, amongst others. The strange world of Venus, revealed by radar, opens our perspective of volcanism to features never seen before: pancake domes of puffed-up lava, and gigantic fault rings sitting over buried magma chambers. The tour of the solar system ends with the only current eruptions outside Earth: the spectacular volcanoes of Io - Jupiter's fiery moon. This highly readable 2005 book, illustrated with the most recent imagery from spacecraft, will appeal to general readers, and students of Earth and planetary sciences.

Review of the hardback: 'This book gives an excellent up-to-date account of how volcanologists, like archaeologists of the planets, are figuratively digging into ancient lava flows, ash falls and enormous volcanic mountains to reconstruct the dramas of geologic evolution on different worlds.' Dr William K. Hartmann, Mars Global Surveyor participating scientist and author of A Traveler's Guide to Mars
Review of the hardback: 'Charles Frankel hosts a space journey that is both entertaining and educational. ... From the lava seas on the Moon to the sulphur plains of Io, this book takes us on imaginary field trips to visit the best of volcanoes everywhere. Somebody get me a spaceship.' BBC Focus
Review of the hardback: '... a fascinating tour of the mightiest volcanoes on Earth, the Moon, Mars, Venus and Io, which specialists and laymen alike will enjoy ... This is an excellent book - it is well written, structured and illustrated.' Sky at Night
Review of the hardback: 'The text provides for all levels of reader, with an innovative narrative, which is a joy to read. It is so quickly engrossing that I had to physically wrest the book from my wife to begin this review.' Steve Ringwood, Astronomy Now
Review of the hardback: '... a fun book ...' The Times Higher Education Supplement
'... the tour guide was so fascinating it made me want to pack my rucksack and set off immediately ...' The Observatory
'... a lucid account of how ideas and knowledge evolved ...' Geological Magazine
'It is written by an eminent geologist with vision ... Altogether a helpful dependable summary of planetary exploration, focusing on twenty-five volcanic sites.' OUGS Journal
"A brightly illustrated geological study of the planets and satellites of our solar system offers a detailed tour of volcanic landmarks on the Earth, our Moon, Mars, Venus, and Io." Baker & Taylor
"...this book is a superb taster for an adolescent who has an interest in planetary science and I can imagine that it would pull them deeper into the discipline..." - The Observatory, Eve Scott

Charles Frankel is a geologist who has written several books and directed scientific documentaries.

GOR001717649
Worlds on Fire: Volcanoes on the Earth, the Moon, Mars, Venus and Io by Charles Frankel
Charles Frankel
Used - Very Good
Hardback
Cambridge University Press
2005-09-22
384
0521803934
9780521803939
N/A
Book picture is for illustrative purposes only, actual binding, cover or edition may vary.
This is a used book - there is no escaping the fact it has been read by someone else and it will show signs of wear and previous use. Overall we expect it to be in very good condition, but if you are not entirely satisfied please get in touch with us.