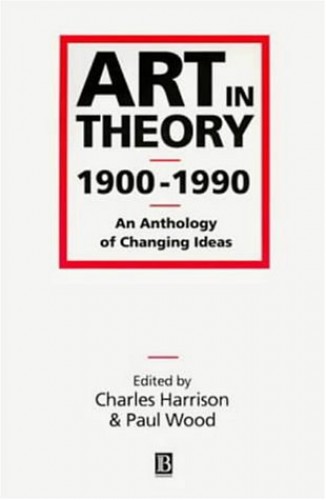 In Stock
$36.99
inc. GST
This text examines art and art-critical theory of the 20th century and is designed to equip the reader with the necessary materials for an understanding of 20th century art at a time when debates about the status of modernism have led to an increasing interest in critical and aesthetic theories.
Like New Very Good Good Well Read
Only 1 left

Since it was first published in 1992, this book has become one of the leading anthologies of art theoretical texts in the English-speaking world. This expanded edition includes the fruits of recent research, involving a considerable amount of newly translated material from the entire period, together with additional texts from the last decades of the twentieth century.The features that made the first edition so successful have been retained:The volume provides comprehensive representation of the theories, which underpinned developments in the visual arts during the twentieth century.As well as writings by artists, the anthology includes texts by critics, philosophers, politicians and literary figures.The content is clearly structured into eight broadly chronological sections, starting with the legacy of symbolism and concluding with contemporary debates about the postmodern.The editors provide individual introductions to each of the 340 anthologised texts. Material new to this expanded edition includes texts on African art, on the Bauhaus and on the re-emergent avant-gardes of the period after the Second World War. Post-modernist debates are amplified by texts on gender, on installation and performance art, and on the increasing globalisation of culture.

"It's hard to imagine a more useful and at the same time more imaginative selection of critical theory and theoretical texts than the ones gathered together in Art In Theory."

"Occasionally one comes across a book that is at once compelling and frightening, a book that excites and disorientates, a book with intimations of the sublime. Art in Theory is such a book. An indispensible source book." Arlis News-Sheet

"This anthology will be useful to all lecturers and students interested in this subject." Times Higher Education Supplement

"Harrison's and Wood's contribution to our understanding of art in this century seems likely to find its place on bookshelves and in bibliographies for many years." Journal of Art & Design Education

"Will be welcomed by teachers of art history, their students, and lay readers who are interested in the theories which have underpinned developments in the visual arts during the last century... Excellent... this will certainly become the standard work of its kind for a long time to come." British Journal of Aesthetics

"An outstanding instrument with which to explore modern art theory." Archis

Charles Harrison is the author of a number of books on modern art criticism and art theory. He has been continuously involved in modern art as an exhibitor, critic, historian and theorist.

Paul Wood has published widely in exhibition catalogues and journals including Art History, Artscribe and Arts Magazine. He is a consulting editor for the Oxford Arts Journal.

Introduction. Part I: The Legacy of Symbolism: 1. Classicism and Originality. 2. Expression and the Primitive. Part II: The Idea of the Modern World: 3. Modernity. 4. Cubism. Part III: Rationalization and Transformation: 5. Neo-Classicism and the Call to Order. 6. Dissent and Disorder. 7. Abstraction and Form. 8. Utility and Construction. Part IV: Freedom, Responsibility and Power: 9 The Modern as Ideal. 10. Realism as Figuration. 11. Realism as Critique. 12. Modernism as Critique. Part V: The Individual and the Social: 13. The American Avant-Garde. 14. Individualism in Europe. 15. Art and Society. Part VI: Modernisation and Modernism: 16. Art and Modern Life. 17. Modernist Art. Part VII: Institutions and Objections: 18. Objecthood and Reductivism. 19. Attitudes to Form. 20. Political Aspects. 21. Critical Revisions. Part VIII: Ideas of the Postmodern: 22. The Condition of History. 23. The Critique of Originality. 24. Figures of Difference. Bibliography. Index.

GOR010348700
Art in Theory, 1900-90: An Anthology by Charles Harrison
Charles Harrison
Used - Like New
Paperback
John Wiley and Sons Ltd
1992-11-19
1216
0631165754
9780631165750
N/A
Book picture is for illustrative purposes only, actual binding, cover or edition may vary.
The book has been read, but looks new. The book cover has no visible wear, and the dust jacket is included if applicable. No missing or damaged pages, no tears, possible very minimal creasing, no underlining or highlighting of text, and no writing in the margins.