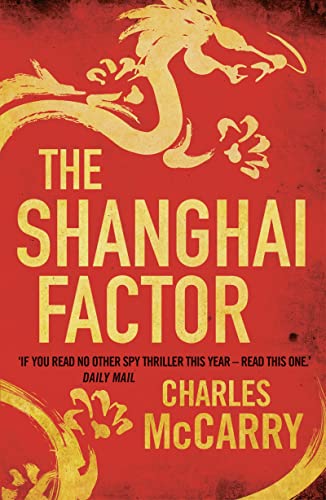 The Shanghai Factor
by Charles McCarry

A deep-cover American agent in China is given a new brief: Infiltrate the Chinese Secret Police, Work Alone.

The Shanghai Factor by Charles McCarry

He's meant to be laying low, polishing his Mandarin and awaiting further instructions from Washington. But Shanghai is a difficult city to sleep in, especially when his nights are taken over by the seductive but enigmatic Mei - a woman with secrets he'd rather not hear.

Then he is tasked with a delicate operation. Infiltrate the core of the Chinese intelligence service. Distinguish friend from foe. Report to a single contact at HQ. Trust no one. Tell no one.

Pushed out into the cold, in a city of millions he's suddenly very, very alone.

But in Shanghai city you're never truly alone. Faceless strangers linger in the shadows, watching your every move. No one is safe from the Guoanbu. Not even a spy with no name...

'If you do not read another spy novel this year, read this one, it will not disappoint.' Daily Mail.
'Better than John le Carre... perhaps the best ever' Lee Child.
'There is no better American spy novelist' Time Magazine.

Charles McCarry has served as an undercover officer for the CIA in Europe, Asia and Africa. He is the author of twelve previous novels, as well as numberous works of non-fiction.

GOR010799762
The Shanghai Factor by Charles McCarry
Charles McCarry
Used - Like New
Paperback
Head of Zeus
2014-03-13
304
1781855110
9781781855119
N/A
Book picture is for illustrative purposes only, actual binding, cover or edition may vary.
The book has been read, but looks new. The book cover has no visible wear, and the dust jacket is included if applicable. No missing or damaged pages, no tears, possible very minimal creasing, no underlining or highlighting of text, and no writing in the margins.